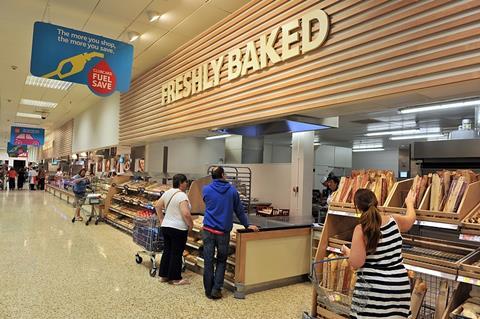 Tesco bosses claimed they were responding to customer trends which had seen a big shift in customer tastes and preferences, away from traditional bread loaves

More than 1,800 jobs are at risk after Tesco announced a major shake-up of its in-store bakeries today.

The changes, which will come into force in May, will involve a shift towards bakery products being part-baked in-store instead of baked from scratch, the retailer said.

Tesco bosses claimed they were responding to customer trends which had seen a big shift in customer tastes and preferences, away from traditional bread loaves.

However, the move was described as “devastating” by union bosses, coming just over a year after Tesco cut thousands of jobs by ditching its fresh food counters at hundreds of stores.

In another 58 stores, bakeries will scrap scratch baking altogether, with all products pre-prepared then baked and finished in-store.

Tesco said the move would allow it to focus on the wider range of options demanded by today’s customers, with sales of wraps, bagels and flatbreads growing strongly.

However, it admitted the move would require far fewer bakery staff.

A consultation period has begun today with the 1,816 bakery staff at risk of redundancy, although Tesco said it hoped many could be found jobs elsewhere within the retailer.

The move is another blow for Tesco staff, with the supermarket announcing in January last year plans it was closing food counters at 90 of its stores as part of a wider cost-cutting plan affecting 9,000 staff, with other stores switching to flexible opening times.

“We need to adapt to changing customer demands and tastes for bakery products so that we continue to offer customers a market-leading bakery range in-store,” said Tesco UK CEO Jason Tarry.

“We know this will be very difficult for colleagues who are impacted, and our priority is to support them through this process. We hope that many will choose to stay with us in alternative roles.”

Pauline Foulkes, national officer for Usdaw, said: “This is devastating and upsetting news for our members who work in the bakery operations.

“Usdaw will be entering into collective consultation with Tesco to consider the business case for these planned changes over the coming weeks.

“Many of those affected by the proposed changes are skilled workers. While we will do everything possible to maintain jobs or support impacted staff to redeploy into alternative roles, the reality is the opportunities to find suitable alternative skilled roles may be limited for these workers.

“Usdaw representatives will be available to support and advise affected members during this difficult time and throughout the consultation period.”