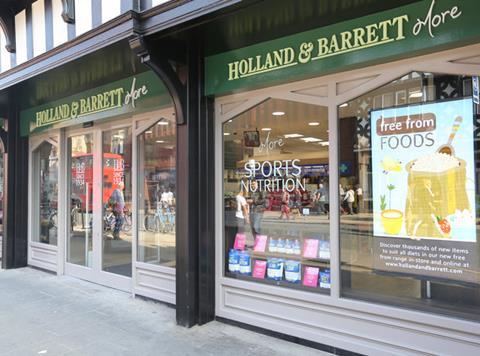 Holland & Barrett has launched its flagship free-from concept store stocking what it claims is the UK’s largest food range of its kind.

The 5,490 sq ft premises, which opened on Thursday in a former Waitrose building in Chester, is the first of 50 Holland & Barrett More-branded outlets that will spring up in Britain over the next two years.

Altogether 700 free-from products, including dairy and gluten free, are being sold in the shop alongside 1,000 online. That figure will, for online at least, rise to more than 3,000 by the end of this year, as the retailer seeks to cater for the estimated 10 million people in Britain suffering with food allergies and intolerance.

“The speed of growth of free-from has seen it transform from what was once regarded as a nutritional niche into a mainstream shopping option,” Peter Aldis, CEO of NBTY Europe, Holland & Barrett’s parent company, said.

“YouGov data on where people buy free-from products shows we already do well in this market, scoring significantly ahead of Boots and very close to Waitrose and Morrisons.”