It’s no surprise it’s the coffee brands that have increased ad spend the most in the past year.

Following a string of failed court cases to protect its coffee pods and with the market awash with copycat capsules, Nespresso has spent 8,074% more on advertising in the last 12 months, and its rivals aren’t far behind.

The installation featured a five metre-wide interactive screen with CGI effects illustrating the intensity inside every tin of Carte Noire. Effects included trails of colour and crystallising patterns; the closer the user to the window, the more intense the experience.

With the coffee brands spending big money to impress, tea players are sticking to old favourites. 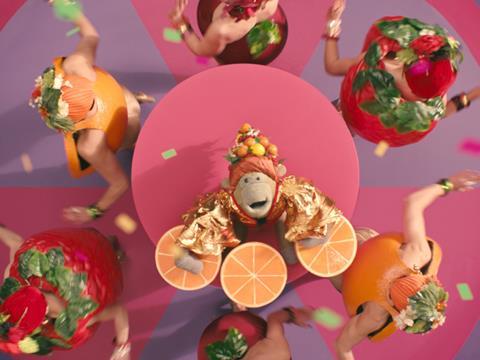 PG Tips used its iconic monkey to front TV ads for its new range of fruit & herbal and green teas while Tetley’s much-loved Tea Folk featured in the brand’s first digital campaign for its green teas.

The company, which is the only tea brand to cut spend in the past year, is betting £100,000 on banner ads on websites including The Daily Mail, Marie Claire and WeightWatchers from September. The ad shows Tea Folk’s Gaffer lying on a bed of tea leaves with nothing but the leaves to preserve his modesty.

“Green teas are among the key growth areas in tea and we know that shoppers respond well to adverts featuring the Tea Folk,” says Andrew Pearl , director of customer and shopper marketing at Tetley.

Twinings is hoping those shoppers respond well to ads targeting working women between the ages of 25 and 45. The company has increased ad spend by 78.8% to £3.9m to increase trial of its herbal infusions range as an alternative to water.

Ebiquity captures, organises and analyses advertising communications from around the world to provide clients with the visibility they require to react to competitor activity, and give them greater confidence to develop successful communication strategies