Iceland set to roll out partnership with The Range 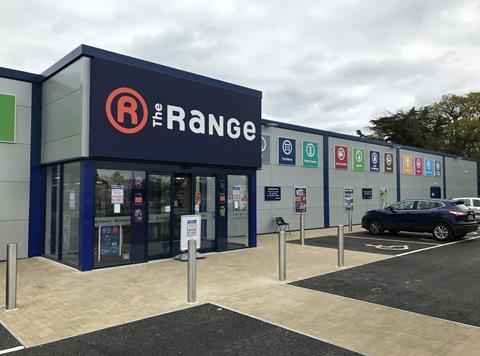 Iceland looks set to roll out its trial of outlets inside The Range home and garden stores, though the move may have been announced ahead of schedule.

The supermarket has been offering all its food lines in The Range stores since August last year, when the trial was launched in three branches.

The trial had been successful and both retailers had now decided to roll it out, a senior figure at Iceland posted on LinkedIn on Friday (8 February).

‘After a successful trial both Iceland and The Range have decided to roll out Iceland in The Range starting from today at the new Derriford Range,’ he wrote.

The post was edited after The Grocer approached Iceland and The Range for a comment and neither retailer has provided a response.

The new out-of-town Derriford store in Plymouth is billed as a ‘destination superstore’ by The Range. It has 70,000 sq ft of trading space over two floors, much bigger than the chain’s average 40,000 sq ft store size, and is connected to the business’s new headquarters.

It’s the latest branch to contain an Iceland outlet, joining the initial three announced last year, in Birmingham and Liverpool.

Read more: Iceland to sell its food ranges in The Range stores

The Range has about 160 branches throughout the UK, favouring out-of-town locations. It includes homewares, DIY and garden departments, selling 65,000 products, a number boosted to 80,000 with the addition of Iceland’s range.

Announcing the partnership last year, Iceland founder and executive chairman Malcolm Walker said the two retailers’ shared values made for a natural alliance, which he hoped would reach “people who have not shopped at Iceland before” in a “new type of location”.

“The ethos of The Range, to bring customers great-quality products at the most competitive prices, is absolutely identical to Iceland’s, so I feel that we make natural partners,” he said.

The Range founder and chairman Chris Dawson said at the time: “This alliance is so exciting. The Range’s massive non-food offering under the same roof as Iceland’s unique food offering will provide customers with a ‘one-stop shop’ and access to over 80,000 different products under one roof.”