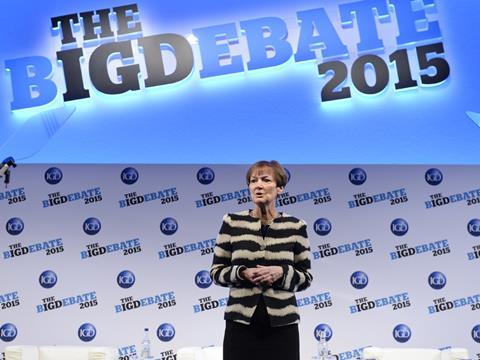 The IGD has unveiled a major new three-pronged anti-obesity strategy developed in conjunction with some of the industry’s biggest hitters.

The Healthy Eating strategy will focus on helping to inspire greater use of nutrition information to drive healthier choices. It will also include pilot schemes involving food and drink industry employees that could become best practice models for encouraging healthy eating in the workplace and at home and a voluntary scheme around the sharing of imformation on reformulation.

The plan was announced by Asda CEO and IGD president Andy Clarke at IGD’s Big Debate event in London this week.

Companies including retailers such as Asda, Sainsbury’s and Tesco, as well as brands such as Coca-Cola, PepsiCo and Mondelez are among the first 30 businesses to sign-up to the scheme.

IGD chief executive Joanne Denney-Finch told The Grocer she had been approached by a raft of senior executives calling for a co-ordinated response to concerns that the obesity crisis could bankrupt the NHS.

“The industry realises that more needs to be done,” she said. “Whilst there is no silver bullet to tackling obesity we believe there is a big opportunity for co-ordinated action, which will have scale and leverage.”

In the first plank of the scheme which will begin early next year, the IGD will be conducting new research to understand how more people could benefit from using nutrition labelling more. It is also planning to produce recommendations from this research for the industry to act upon.

Phase two will see the IGD working with a research partner to conduct a series of healthy eating interventions across various food and drink employee sites.

As part of these trials, which will start next year and then be scaled up in 2017, it will be testing various ‘nudge’ techniques’ to encourage healthier choices in the workplace which could lead to potential benefits in the home.

On reformulation, IGD is hoping to help smaller businesses plus those with less developed reformulation strategies to improve the healthiness of their products. It is is set to onsult with SMEs and foodservice companies to understand attitudes, knowledge and barriers to reformulation early next year.

It will then use these findings to build on existing industry case studies and guidelines. This guidance will be widely promoted and freely available later in the year.