Can Jack's do enough to tackle the discounters without cannibalising Tesco sales? 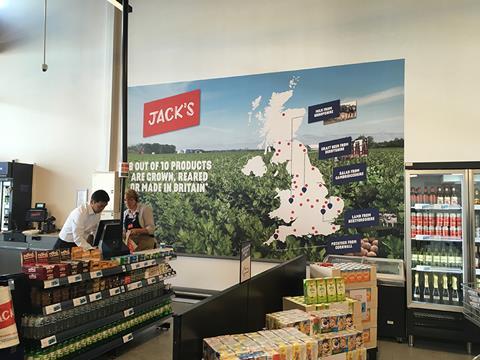 The British angle is great for this part of the world and constitutes a valid marketing angle, but it won’t lay the foundations of the demise of Aldi and Lidl

On a grey, washed-out Fenland autumn morning in Chatteris, Cambridgeshire, the new Jack’s store is not hard to find – it jumps out of the landscape at you.

It’s the third week now since the big press launch and the huge car park is barely a quarter full – it contains a mix of small, cheap cars and shiny new BMW and Mercedes executive cruisers. Clearly the captains of the retail industry are still making the journey to have a look at the new format.

And it’s a very pleasant place to shop – a cheery, red, white and blue Jack’s sign greets the shopper. Wide, spacious aisles, designed to speed up replenishment, create a sense of calm, cleanliness and efficiency. There’s even a bean-to-cup coffee machine that vends a fresh £1.59 cup of coffee – which seems somewhat at odds with the super-low Aldi and Lidl-bashing prices.

As with the Lidl footprint, fresh bakery is first in flow, with what is no doubt a deliberately undersized oven, to ensure there is always a very busy employee baking fresh-smelling loaves and croissants. Produce follows, leading into meat and chilled foods. The grocery aisles are functional, neat and, to be frank, a bit soulless – certainly very few of the shoppers are ‘lingering’. The Aldi-style ‘WIGIG’ – when it’s gone it’s gone – section looks like a bit of an afterthought, cobbled together and not particularly comprehensive.

‘Eight out of 10 products are British’ is the strapline proclamation throughout the store. The local sourcing and local provenance claims leap out: even the reverse negative is used as a positive for foreign food. ‘Imported by Jack’s’ is the sub-branding.

Now I’m sure the Great British public is all in support of good old hard-working British farmers and producers, but since when did that same Great British loyalty stand the test of a cheaper, better Japanese or Korean car, or a French cheese? Does ‘Eight out of 10 products are British’ really constitute a credible point of difference and competitive advantage? We think not, but perhaps that’s not the point. The British angle is great for this part of the world and constitutes a valid marketing angle, though it will not make this embryonic chain an Aldi/Lidl killer. Whatever Tesco’s plans for this small test bed chain, its real strengths lie elsewhere.

Quality across the store is excellent. Produce and meat looks fresh and bright – clearly the store is still ‘bedding in’ over generous waste budget targets and is getting some extra special merchandising care, but if it can maintain these standards it’s a cracking place to shop.

As the format – ‘limited range discounter’ – suggests, it caters for a base ‘fill the cupboard and refrigerator’ shop and little else. But it does what it does well, which raises the $64m question: if you put a Jack’s next to a standard Tesco supermarket or superstore, how much of the standard store’s trade would switch?

On what we saw on our visit we’d put a tenner on 40%, which raises an even bigger, Tesco-sized question: what is Jack’s raison d’être?

Tesco won’t or currently can’t answer the question, what with Dave Lewis saying he would rather cannibalise his sales to another of his own stores than lose them to a competitor. But at what cost to Tesco’s stated, and as far as the City is concerned guaranteed, aspirations to build its net margins back to 3.5%-4% by 2019/20?

Perhaps the answer lies in Tesco’s 172 Metro stores – those unloved, uninvested-in, urban orphans of the greater Tesco empire. Tesco itself admits they are too big, stock too wide a range and are expensive to operate but until now it has had no solution.

Aldi and Lidl are pretty fastidious about only building standardised, efficient low-cost sheds on relatively cheap brownfield sites outside of expensive city centres (though Aldi is talking of moving into central London). So, what about a central urban food discounter?

With a limited range, and being efficient and cheap to run, its only real competitors would be very small, range-restricted and relatively high-priced convenience stores. It could be a very clever masterstroke by Lewis and the Tesco team and, based on its track record over the past couple of years, we won’t be betting that tenner against them!