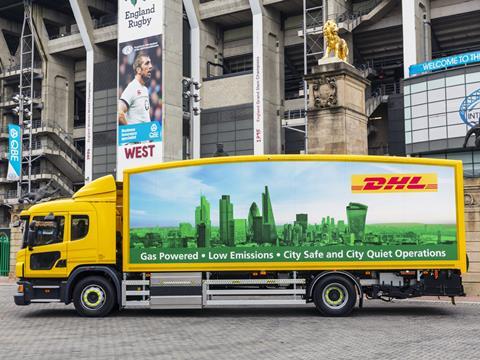 Logistics giant DHL has launched a new lorry that it claims strengthens the case for night-time deliveries.

“When we developed this new model, we were thinking about how to re-earn the right to deliver at night,” said DHL MD of transport UK & Ireland Tim Slater. “The prototype has only just been completed and next week we’ll start carrying out trials on it, but after that, it’s a case of showing it to local councils to see if they’ll lift restrictions.”

Slater added freight currently accounted for about 16% of traffic, rising to 28% during rush hour. “Supermarkets realise that they need to do things differently - especially with convenience stores,” he said. “In the future, retailers could bring in staff to accept deliveries at 2am, or allow drivers to leave products in air locks.”

In addition to its quieter engine, the lorry features a rubber floor that absorbs the noise of rolling cages. If the driver opens the door, the radio automatically cuts out. Plus, new automation technology silences the usual clanking sounds of tail lifts and shutters, while lower front-end additional windows and 360-degree cameras improve visibility.

Parliamentary Under Secretary for the Department of Transport Claire Perry endorsed the vehicle, saying: “The new concept vehicle from DHL is a positive step in the right direction to addressing this issue and I encourage industry-wide adoption of the latest technology to ensure the highest standards of road safety.”

DHL will trial the prototype and collate driver feedback at its consolidation centre in Camden from next week.