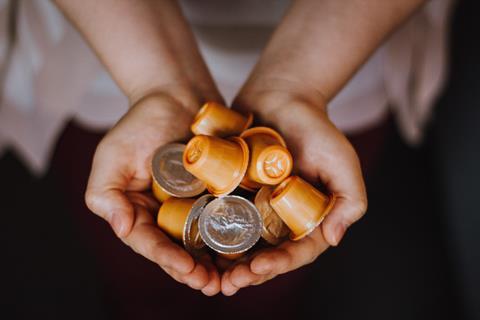 The industry is at last working on more measures to reduce, reuse and recycle

It used to be Catholics that suffered from a guilt complex. Now it’s consumers. Every time I open a crisp packet or use a coffee pod – let alone unpack my (much used) shopping bags of their contents – I’m consumed with guilt over the environmental impact of both my choices and actions. And so must the industry be.

Until recently, the response has been to blame the government and local authorities for their failure to provide a national recycling framework. And it’s a fair point. But the industry can’t wash its hands of responsibility for this mess and at last it’s working on measures to reduce, reuse and recycle.

As well as substrate switches, the most high-profile moves have been on the reduction side, though progress is still slow. So it was interesting to see Asda become the first big four supermarket to trial a packaging-free fixture, and doubly so because it’s working alongside branded manufacturers to deliver this.

So far only Waitrose has conducted trials and while they’ve been successful, the fact they’ve rolled out the concept to just four stores so far shows how difficult this is to scale up. Last year Asda called on brands to put the environment before sales and to act quicker to reduce packaging, but getting rid of it – with all the marketing that involves – is a really daunting prospect for brands and a huge step into the unknown. It’s also noteworthy because Asda is simultaneously cutting in-store costs. And a self-service fixture is complex and potentially costly in terms of mess, shrinkage, food safety – and lost sales.

No wonder the majority of focus is on the recycling side. In addition to trialling – and working with various governments to set up – a number of deposit return schemes, supermarkets and suppliers have been looking to provide additional recycling facilities. Meanwhile, suppliers of pods, pouches, crisp packets, toothpaste and other ‘difficult’ packaging have been setting up postal and collection return schemes for their ‘empties’. Trouble is, the return rates on these onerous and patchy schemes are woeful. Let’s hope Nestlé’s two new Podback kerbside collection schemes move the dial a bit further.