Brexit and the beanstalk: an old English fairy tale with an uncertain ending 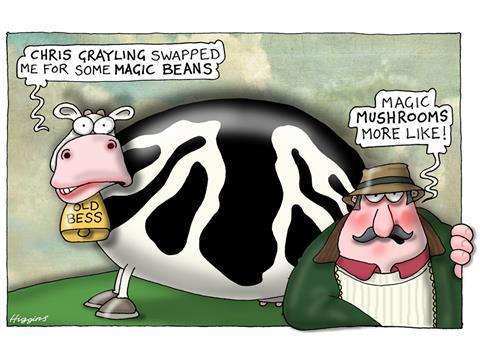 Once upon a time, there lived an Old Woman called Theresa and her son, Grayling. He was a good for nothing sort, who mostly played with his toy cars and trains.

They were very poor. “We don’t have enough money to buy seed!” said the Old Woman. “We must sell our cow, and with the money buy enough seed to plant a good crop.”

So Grayling went to the market, which was based in Brussels, where he met a funny-looking foreign man called Barnier.

“I need to sell my cow,” said Grayling. (He wasn’t very good at negotiating.) “We’re broke and need money to buy food.”

“I’ll give you nothing for that. Not until you’ve paid your debts. £20bn, please!”

“Suit yourself. Tell you what. I can give you some magic beans. You can grow your own.”

“You blithering idiot,” said the Old Woman. “What am I supposed to do with those?”

Mrs May was furious and threw the beans out the window.

The next morning when Grayling awoke, a giant pumpkin plant was growing where the seeds had fallen. It grew all the way to the top of the sky.

So Grayling climbed up the beanstalk. At the top he found some pumpkins… and a castle. In it was a giant ogre with only one eye called Juncker.

“Fee-fi-fo-fum,” Juncker bellowed. “I smell the blood of an Englishman. Be he alive, or be he dead, I’ll have his bones to grind my bread.”

Grayling was scared. As he searched for the exit, out of the corner of his eye he spotted a hen that was laying golden eggs. But the hen was from Belgium (or was it Holland?) and you can’t trust their eggs so he didn’t want one of those, thank you very much, and he ran off empty handed, shinning it down the beanstalk at the double.

At the bottom he took out an axe. The beanstalk came crashing down - and though there was no sign of the giant, he did collect a couple of pumpkins from the floor.

“Job done,” said Grayling triumphantly. “We can feast on pumpkin for the winter.”

“What about my winter salad?” said the Old Woman. “What about oranges and lemons? What about wine that actually tastes good and is cheap? (Or at least it was.) What about rice and olive oil and avocados and beans? Camembert and Roquefort and Emmental and Gouda? And where are we going to grow all this food?”

“No, it isn’t. And where are the farm hands anyway?”

“You know what this means don’t you?” the Old Woman said.