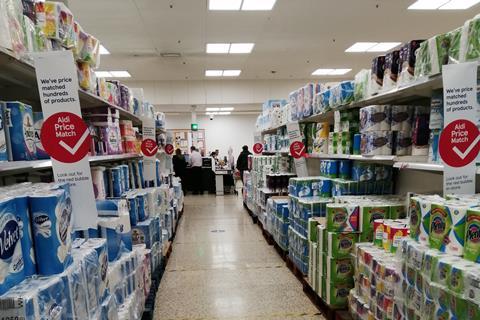 No one could accuse Tesco of taking an easy path. Since announcing the latest phase of its Aldi Price Match, which extends the discounter-rivalling promise to brands, it has come under fire from all sides. First came the backlash from suppliers, who were understandably concerned over footing the bill for lower prices – especially at a time of national crisis. As one supplier warned at the time, there may well be “blood on the carpet”.

As if that wasn’t enough controversy, this week two new thorns in its side have emerged. Not only is it likely to have to deal with another face-off with Aldi on advertising standards, but IRI research has questioned the wisdom of everyday prices across the board.

The market research makes interesting reading. IRI points out that EDLP simply doesn’t deliver the same volumes as promotions on discretionary items such as beer or snacks. So suppliers will essentially be absorbing lower costs, only to get lower unit sales in return. Tesco will lose revenue on those items and jeopardise the supplier relationship in the process.

That is a risky strategy. As Dave Lewis himself said in the last quarterly results, Tesco’s stellar performance of late has been down to co-operation with suppliers, not thanks to its capacity to throw its weight around in negotiations.

Tesco: why our push for low prices isn’t anti brand

For its part, Tesco may feel it’s a risk worth taking if it can bring in new shoppers with its basic promise: that it delivers discounter pricing, with all the benefits and ranging of a supermarket. It’s a pledge that could hold particular appeal as a recession looms.

The pivotal element will be whether Tesco can communicate that effectively to shoppers, who may draw their own conclusions from seeing fewer promotions in the aisles. Which brings us to the likely advertising dispute with Aldi. The importance of a bold campaign is clearly why Tesco decided to continue down the route of directly comparing itself with the discounter, despite losing an ASA ruling last year.

Because if Tesco can’t convince shoppers, both the supermarket and its suppliers stand to lose.