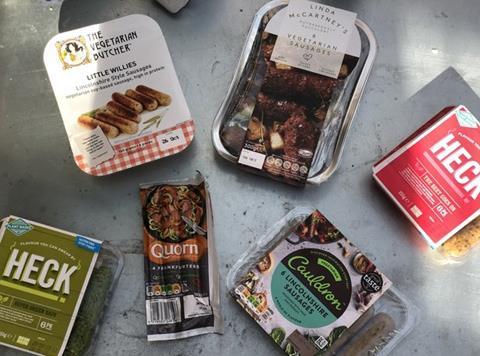 Waitrose has introduced a host of new vegan branded and own-label products to its shelves this year, including this selection of plant-based sausages

It was the worst possible timing. Waitrose is readying its annual Food & Drink Report. It’s all about the ‘Era of the Mindful Consumer’ and among other trends highlighted is the rise of vegetarian and vegan diets, amid growing mindfulness about the planet, animal welfare and individual health. And in the same week, the ‘Mindless’ editor of the Waitrose customer magazine is exposed for sending an email to a freelance journalist, who is pitching a series of articles on veganism, suggesting that all vegans should be ‘killed, one at a time’, or ‘force fed meat’, and ‘made to drink red wine’ or ‘trapped’ or ‘interrogated’ over their ‘hypocrisy’.

William Sitwell, the editor in question, has since been forced to resign. Which on the one hand looks harsh: over a single email, after 20 years of distinguished service, as a multi-award-winning editor - though we don’t know all the circumstances. I don’t know if the rudeness is out of character, for example. But you only need to look at the number of recipes Sitwell commissioned for the latest issue of Waitrose Food that are either vegetarian (32%) or vegan (20%) to feel that the claim, in his apology, that he “loves and respects people of all appetites, be they vegan, vegetarian or meat eaters - which I show week in week out through my writing, editing and broadcasting” - is not entirely disingenuous. So perhaps, amid so much coverage and hype and zeal around the trend, he was just letting off a little bit of steam, albeit it rudely.

On the other hand, as they say in retail, the customer is never wrong. And the customer is not just Waitrose, which as the editor of its customer magazine, Sitwell has embarrassed. It’s Waitrose customers - who are embracing this ‘mindful’ trend in their droves. And Waitrose cannot afford to offend them.

Waitrose has spent a lot of time and effort investing in its vegan and vegetarian ranges, with a host of new brands now available on its shelves, as well as new own-label products. And it’s paying off: in a rather better piece of timing, this issue includes our own report into plant-based food, offering fascinating insights into how the category is emerging. Waitrose is clearly setting the pace (along with Ocado), though Tesco and Sainsbury’s are also ahead of the curve.

As well as winners and losers, our report also shows the category entering a new and potentially more interesting phase. Away from black and white, good or bad narratives, towards a more nuanced discussion around what consumers want from plant-based, what really is selling in stores, and what isn’t.

The recent controversy around salt levels is one sign that the days of simply slapping a vegan label on a product and expecting it to sell are about to be over. Consumers are learning not all vegan products are healthy, nutritious, or good for the environment. There’s also that fight between those that seek to imitate meat, and those that savour and celebrate inventive cooking using glorious but non-meat and non-animal ingredients. Some still taste worthy and are hard work. And some just taste bloody great.