With the writing on the wall for Sainsda, what now? 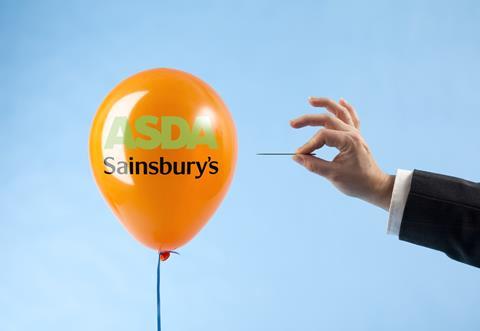 So long, then, Sainsda. The CMA’s findings are only provisional and Sainsbury’s and Asda will get an opportunity to challenge them, but the writing is on the wall.

Higher prices. Reduced quality and choice. Worse shopper experience both in-store and online. Less competition at the pumps. And a list of suggested remedies so punitive as to be likely unconscionable to the would-be merger partners. The competition watchdog dismantled the rationale behind the deal so comprehensively this week that it left Sainsbury’s and Asda with little room for further manoeuvre.

Although Mike Coupe came out fighting on Wednesday morning, decrying the findings as “outrageous” and accusing the CMA of not only moving the goalposts but redesigning the ball and pitch, it’s hard to see a way forward that would result in his plans still coming to fruition.

Which means UK grocery is quickly having to move on to the next big question: now what?

Because while Sainsda may be dead in the water, the underlying market dynamics that prompted the UK’s second and third-biggest grocers to want to join forces haven’t changed.

The threat of the discounters is as alive as ever. Growing online competition from the likes of Amazon looms large. And an emboldened Tesco-Booker is flexing its muscles.

Once the dust settles on this week’s news from the CMA, Sainsbury’s and Asda will be under pressure to outline what - if any - alternative plans they have to address these challenges now that a merger is likely off the table.

For suppliers, many of which breathed a collective sigh of relief on Wednesday, this means the uncertainty is far from over. It only took a few hours for rumours of potential private equity interest in Asda to start circling in the wake of the CMA announcement.