Less meat but better is the key message 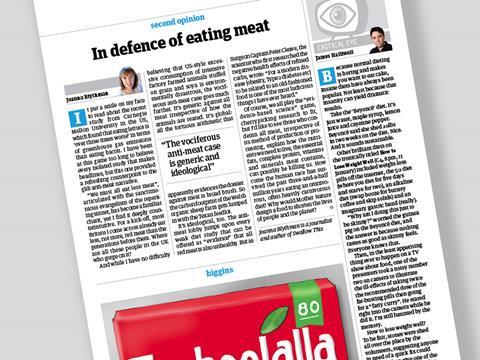 Sir, Joanna Blythman (‘In defence of eating meat,’ 16 January, p9) raises an important point about not being black and white about meat consumption. But instead of exploring the growing consensus behind a more nuanced message of eating less and better meat, she chooses to further polarise the debate.

The Eating Better alliance brings together nearly 50 national organisations from environmental, public health, animal welfare, international development, research and responsible food arenas to this agenda. We encourage people to shift to the very types of ‘better’ meat that Joanna encourages - naturally reared, pasture-fed, organic - not the ‘cheap’ industrially produced meat that comes at such a cost to animal welfare and the environment. But this shift means valuing the meat we do eat and eating less of it, whether red, white or processed. The impacts of high meat consumption on our health, the health of the planet and animal welfare are well established.

Joanna also asks who are the people who over-consume meat. In the UK it’s the six out of 10 men and one in four women who exceed the government’s health guidance of 70g/day red and processed meat (not including chicken). So we need to keep talking about meat for our health and the health of the planet.