Can a Heidi Klum fashion line really work at Lidl? 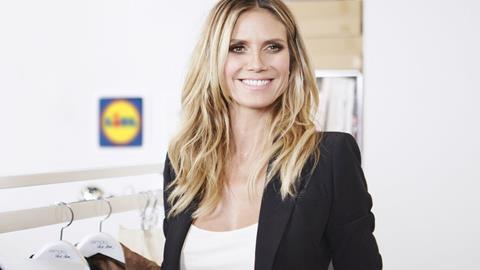 You can hardly move for A-list blondes blocking up the bargain aisle at Lidl at the moment.

First Britney Spears jetted in from Vegas to lend the discounter her multimillion-pound tresses for an exclusive haircare range in 2014. Featuring £1.99 paddle brushes and an £11.99 styling tong ‘inspired’ by the starlet, the range reportedly had fans of both Britney and bargains in paroxysms of joy.

Then came hotel heiress Paris Hilton. In December 2016, she (temporarily) shunned haute couture and a suite at Daddy’s hotel to put her face to a bright pink beauty range for the retailer.

And today came the latest blonde bombshell from Lidl, in the form of 5ft 9in supermodel Heidi Klum.

Fresh from showing off, well, everything, in a new Rankin photography book, Klum announced that she has designed an exclusive line of top-quality fashion to be nestled in Lidl stores alongside £3.89 bottles of Chenin Blanc and £1.99 Italian salami.

Fashion “should bring pleasure” to everybody, mused Klum. Fair enough. But is Lidl really the right vehicle for any range targeted at aspirational fashionistas?

On the plus side, unlike M&S, Lidl doesn’t have a frumpy fashion reputation to shed. It isn’t known for big knickers or sensible skirts. Its shoppers tend to be younger, with those 18 to 24 years old the biggest fans, according to IGD. They also tend to be middle class. And female. In other words, they’re shoppers with some spare cash and of roughly the right age to splash out on doomed attempts to look like a supermodel.

But while price tag and comparable quality is good enough reason for them to swap M&S for a discounter when it comes to Scottish smoked salmon or a nice bottle of merlot, I don’t see the same logic drawing this millennial class out of Topshop and into their nearest Lidl.

As M&S has learned to its peril, fashion, far more than grocery, is attached to social kudos. We’ll happily brag about saving a fiver on a fillet steak, but I’d hazard a guess most would sooner keep it under wraps if the dress it’s being served in came from the next aisle down.

And that takes me neatly on to the shopping experience itself. How does Lidl plan to merchandise this high fashion by Heidi? Non-food special buys, be they circular saws, strimmers or inflatable greenhouses, are currently lumped together in cramped ad hoc areas of the stores. Will there be space for neat rails of clothing and a life-size cut-out of Klum?

It won’t be too long until we find out. But while this latest A-lister tie-up is undoubtedly a major coup for the discounter, I’m struggling to see it as the next step in a successful foray into fashion by Lidl. Even looking like that, Heidi Klum can’t work miracles.