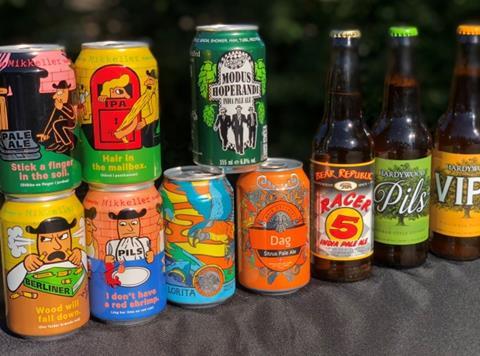 M&S has boosted its beer range with a raft of new own-label and international brews in a tie-up with distributor Real Ale.

The retailer has drafted in 47 new SKUs through Real Ale, including 28 new regional and international craft brands from the likes of Mikkeller, Brick Brewery, Siren Craft Brew, Sixpoint and Aegir. It has also added two new own-label six-packs of its American Pale and Double Hopped Citra brews, and three new multipacks of its ‘Laid Back’ range, which includes a pale ale, a lager and an IPA.

M&S has also launched ‘12 Beers of Christmas’ 12-can multipacks as the festive season approaches, featuring brews from the likes of Meantime, Harbour, Hogs Back and Wimbledon Brewery.

The new additions to the M&S range represented “the crème de la crème” of the sector, said Real Ale MD Zeph King, and were a “fantastic commercial boost for the smaller breweries that have been selected”.

It “illustrates M&S’s commitment to give its customers access to unusual, often hard-to-source products at an affordable price”, he added.

The news brings the number of products supplied to M&S by Real Ale to over 200. The development of its international beer offer would “complement our diverse British branded and own-label lineup”, said M&S beer buyer Michael Wallis.

It follows similar craft-focused range reviews from M&S’s supermarket rivals over the past month. Asda culled its bottled ale range over the summer to make way for a slew of craft beers, while Tesco’s recent approach has seen some smaller suppliers ditched, with the supermarket turning in many cases to craft offers from bigger brands or larger suppliers.

Recent figures show value sales of alcohol at M&S are rising steadily, up 6% year on year. However, it only commands a fractional (2.1%) share in the category compared with its rivals [Kantar Worldpanel 52 w/e 17 June 2018].