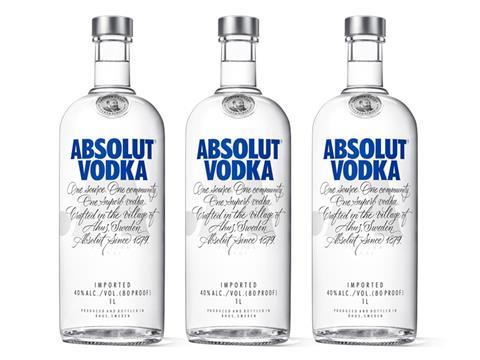 Pernod Ricard is giving the bottles it uses for Absolut vodka their first major redesign since the launch of the brand in 1979.

Rolling out worldwide from November, the new bottle keeps the basic design features but has been updated with a reduced glass weight, more clearly defined shoulders, straighter neck and flattened bottom. The label features a new script font, a logo on two lines without the words ‘Country of Sweden’, a redesigned medallion, and a large letter A on the back of the bottle.

Alongside the new look, Absolut is aiming to tap what it says is a growing consumer interest in classic cocktails with new UK campaign Taste Perfection.

Brand ambassador Ricardo Dynan has created 12 twists on classic cocktails such as the Bloody Mary, Cosmopolitan, White Russian and Sex On The Beach, which will be communicated to consumers through social media. The brand is also partnering with 12 Central London bars during London Cocktail Week from 5 to 11 October, each promoting one of the 12 ‘classics with a twist’.

Globally, however, the stuttering performance of the brand - especially in the US - led Pernod Ricard to book an impairment charge of €404m in its results for the 2014/15 financial year, causing the business to under-shoot performance expectations.

Chris Wisson, senior drinks analyst at Mintel, told The Grocer that the contrast in Absolut’s fortunes could be explained by differing consumer trends in the US and the UK - saying that a deluge of flavoured vodkas in the States had led to “flavour fatigue” and waning consumer interest, as drinkers switched to whisky and rum.