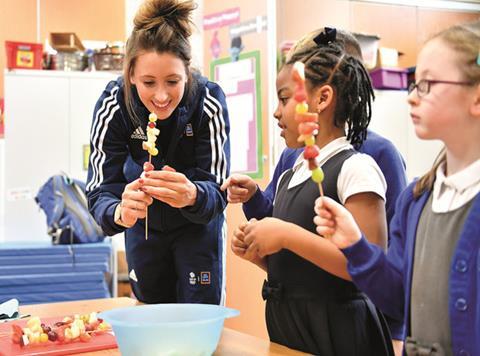 Aldi has extended its sponsorship of Team GB for a further four years, taking the partnership up to the Paris 2024 Olympics.

It will see more Team GB athletes appearing in Aldi campaigns and take the length of the sponsorship, which began in 2015, to three Olympic tournaments over nearly a decade.

It also means the extension of Aldi’s Get Set to Eat Fresh initiative, which has seen athletes including two-time taekwondo gold medallist Jade Jones visit schools as part of an educational programme teaching children about home cooking and healthy eating.

The extended deal will see athletes feature in ads for Aldi’s ‘Everyday Amazing and Super 6’ offers on fruit & veg.

“We’re incredibly proud to continue supporting Team GB on its road to the Tokyo 2020 Olympic Games and, with this new agreement, all the way to Paris 2024,” said Aldi UK CEO Giles Hurley.

“Since our partnership began four years ago, Team GB athletes have been inspiring ambassadors, showing how everyone can create healthy, tasty meals from scratch using affordable fresh produce - and have fun while they’re doing it.

“Their popularity has helped us engage hundreds of thousands of young people in the UK via our Get Set to Eat Fresh initiative, and appearances at our new stores have helped encourage families to include more fresh produce in their weekly shop.”

Bill Sweeney, CEO of the British Olympic Association, said: “We are delighted to extend our partnership with Aldi.

“They are a prime example of a strong relationship through commitment, collaboration, creativity and longevity. We share a common passion for high performance and excellence as evidenced by their continued business growth in the highly competitive UK grocery market.

“Their dedication to programmes such as Get Set to Eat Fresh as a positive contribution to wellbeing through the promotion of fresh and healthy food is an example of how we work jointly to support societal change through athlete lifestyles.”