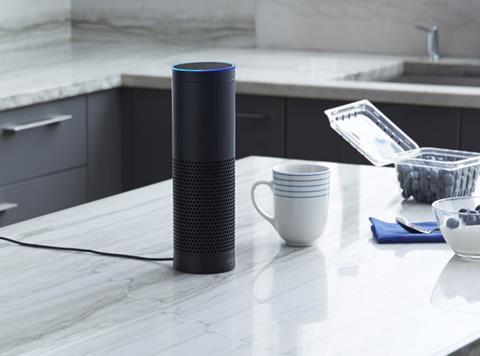 Amazon will use the spot to promote Echo (pictured) and Alexa

Amazon has signed a deal to sponsor The Great British Bake Off which it intends to use to promote its Alexa and Echo smart speakers.

Amazon is thought have paid around £5m to sponsor the second series of the show on Channel 4, making it the internet giant’s biggest ever UK TV deal.

It’s part of a marketing push worth tens of millions of pounds to build on Alexa’s lead over Google Home in the smart speaker market, predicted to see major growth in grocery shopping.

Bake Off’s first series on Channel 4 drew an average audience of 10.5m including recordings and repeats, rising to 11 million for the final.

While that’s fewer than the 13 million the show reached on BBC One, it’s Channel 4’s second biggest audience ever and also the largest of 16-34 year olds for any TV show last year, at an average 2.6m per episode.

Amazon’s sponsorship deal includes the show’s ninth series across both channels, due to air later this year, as well as spin-offs Bake Off: An Extra Slice, Bake Off: The Professionals, and festive episodes.

“It’s a great testimony to the success of Bake Off’s debut on Channel 4 last year that Amazon will sponsor the Bake Off programme brands this year,” said Channel 4’s head of digital and partnership innovation, Jonathan Lewis.

“We’re looking forward to working with Amazon as we build towards the launch of one of the biggest TV events of the year.”