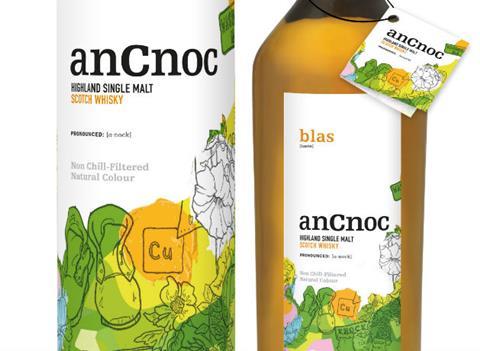 The label he designed for the new whisky (rsp: £50) features visuals inspired by the brand, production methods used at the distillery, and specific tasting notes of Blas, the name of which is Gaelic for ‘taste’.

The single malt (54% abv) promises to be “densely sweet and fruity, with notes of lemon and candied orange peel”.

“The Knockdhu distillery is like no other, using traditional production methods to craft every whisky that is released,” said AnCnoc brand manager Stephanie Allison.

“The partnership with Patrick pays homage to this, celebrating these time-honoured traditions. Every drop of this limited-edition Scotch whisky celebrates Patrick and AnCnoc’s shared Scottish heritage and the spirit of modern tradition.”

Grant said his design had been inspired by time spent exploring the area around the distillery in Knock, Aberdeenshire, and meeting the people who work there.

“Everything in the print is from the hill, the village of Knock or within the distillery itself and tells the story of the making of Blas,” he said.