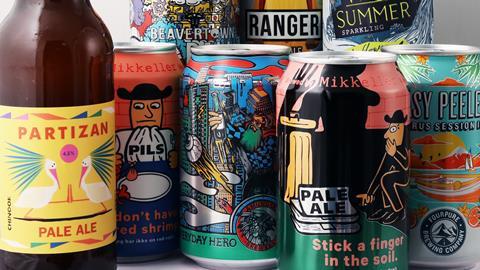 Are craft beer brands and the Portman Group on a collision course over can designs?

After the Portman Group rapped Tiny Rebel for a second time, are other craft beer brands at risk?

What do Marilyn Manson, Grand Theft Auto and craft beers have in common? They’ve all been accused of corrupting the nation’s youth.

Last week Welsh craft brewer Tiny Rebel fell foul of industry watchdog the Portman Group after the group’s complaints panel ruled its ‘Cwtch’ ale cans risked appealing to under-18s (for the second time in three years). The Portman Group has issued a retailer alert bulletin on the beer, meaning it could soon disappear from shelves in the UK.

It’s emblematic of a growing divide between craft brewers who see bright, colourful and exciting packs as intrinsically linked with their independence and appeal, and the Portman Group, which, because it is funded by big brewers like AB InBev and Heineken, is easily fingered as an agent of conformity.

The debate is heating up as the craft category grows: this year saw many of the mults launch their most extensive craft ranges yet, drawing on a wider berth of independent brands - taking them out of largely child-free environments - such as bottle shops and taprooms - and puts them smack bang in front of mainstream shoppers and families. And since it only takes one shopper to raise a complaint it puts craft beer brands potentially on a collision course with the watchdog - and potential ruin if they are banned.

“The last 18 months have definitely put craft and creative packaging in the spotlight,” says Fourpure Brewing Co head of marketing Adrian Lugg. Fourpure is itself currently being challenged by the Portman Group over the can design for its Juicebox IPA, after the watchdog kicked off a random supplier audit when it updated its code earlier this year.

“In terms of leading up to purchase, craft is still a clearly demarked, defined area within shops,” he says. “It’s not like they’ve put them over next to the Twiglets. The challenge is when you get those products home and stick them in the cupboard and a kid opens the cupboard and drinks it.”

That craft beers have largely migrated to more carbon-friendly 330ml cans - while arguably better for the planet - means they’re still more easily confused with soft drinks. Portman Group CEO John Timothy has confirmed its complaints panel “has been clear in previous cases that it believes producers must work harder to demonstrate the alcoholic nature of a 330ml can, given the traditional association with soft drinks”.

Craft beer, being styled as a rebellion against what many saw as a homogenous and commodified category, doesn’t necessarily lend itself to being regulated, however.

“Most craft breweries are made up of half a dozen people brewing, selling, marketing and doing the washing up at the end of the day - I don’t think a lot of breweries even have the time or the capability to think about that stuff,” says Lugg.

“For lots of them it is more about their heart and their blood, sweat and tears - creativity and design is such a great way to show who you are and what you stand for. And a lot of them don’t even think they’re going to be selling in Tesco when they start.”

“We think carefully about things like objectification of women, appropriateness of illustrative content and the general vibe that is being created,” he says, adding there is “absolutely zero guidance from anyone” when it comes to illustrations and designs.

The Portman Group is well aware of the concerns independents have about where it gets its funding. “We are mindful of the need to further demonstrate that we hear and engage with a broad cross-section of voices within [the industry],” a spokeswoman says. “We are exploring new and exciting ways to allow more people to get involved with Portman Group on a day-to-day basis and would certainly be delighted to hear from producers keen to work with us.”

How it will do this, exactly, remains unclear. As things stand, winning the trust of independents will not be easy.