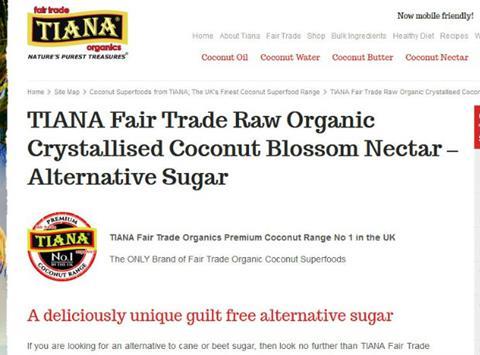 The online claim has since been amended

Tiana Fair Trade Organics has been banned from claiming its crystallised coconut blossom nectar is a ‘guilt free sugar substitute’.

The Advertising Standards Authority upheld two complaints made against the ‘guilt free’ and ‘sugar substitute’ phrase - which accompanied the product on the company’s website at the beginning of February - claiming it breached CAP Code rules on food, food supplements and associated health or nutrition claims.

The ASA noted that the term ‘guilt free sugar substitute’ appeared in the ad on two occasions and could be understood to be a reference to a general benefit of the product for overall good health or health-related wellbeing because it suggested it was beneficial in comparison with sugar.

In its response, Tiana said the claim was intended to state ‘guilt free alternative sugar’ rather than ‘guilt free sugar substitute’ and the terminology had been amended.

The company also stated that the term ‘guilt free’ was intended to refer to the product’s low glycaemic index (GI), which at 35 was the lowest possible GI, compared with the normal level of white sugar (100).

However, the ASA pointed out there were no authorised health claims in relation to GI, and such suggestions could not be made in advertising.

In addition, the watchdog said the wording could be understood to be a nutrition claim even though the ad ‘did not reflect the wording of a permitted nutrition claim’ and Tiana had not demonstrated that the product met the conditions of use to allow it to carry such a claim.

“The ad must not appear in its current form,” the ruling stated. “We told Tiana Fair Trade Organics Ltd to make references to general benefits of a product for overall good health or health-related wellbeing only if they were accompanied by a relevant specific authorised health claim. We also told them to make nutrition claims only if they were permitted under the regulation and to ensure they were in a position to demonstrate that products met the conditions of use for any health or nutrition claim they made.”