Bunnahabhain kicks off ad push playing up its Islay roots 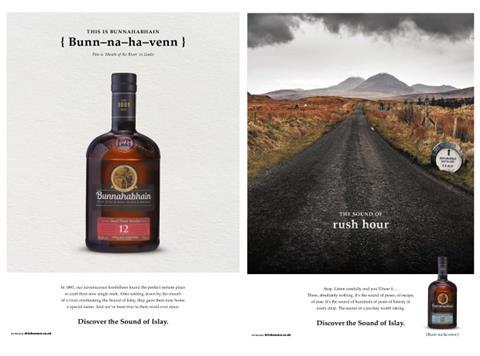 Bunnahabhain has mounted a fresh push playing up its Islay provenance.

It has launched a digital campaign, called The Sound of Islay, designed to “celebrate the rugged, romantic isolation of Bunnahabhain and its seafaring heritage”.

Ads have rolled out with the brand’s name spelled phonetically on them, playing on the fact that some shoppers find its name and those of some of its whiskies (such as Stiuireadair) difficult to pronounce

“We hope this will aid us in driving a closer connection between our whisky, which is enjoyed worldwide, and our locational heritage through our Gaelic roots,” said brand director Derek Scott.

It comes as the brand, which is owned by South African drinks giant Distell, won the titles Best Scotch Islay Single Malt and 21 Years & Over at the World Whiskies Awards for its 25-year-old variant this year, as well as other wins across Islay categories for its 12-year, 18-year and Stiuireadair drams.