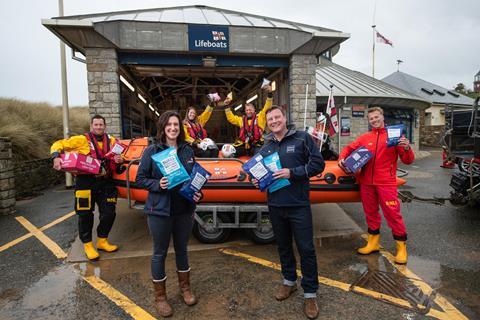 The two-year partnership, which kicks off this month, will see RNLI branding roll out across the brand’s Sea Salt and Sea Salt & Malt Vinegar crisp packs.

The new packaging will feature the charity’s key ‘Float to Live’ messaging and a QR code, which directs consumers to a new RNLI section of the Burts website. Shoppers will be able to learn more about the charity or make a voluntary donation via the link.

Burts’ new-look crisp packs will hit shelves at Asda, Morrisons and Tesco, as well as Costa stores and RNLI shops in the south west of England from July.

The partnership will be supported by a £1m marketing campaign, including an “exciting NPD pipeline”, the brand added.

Its heritage and success in the coastal south west region of England made it the “perfect fit” for a partnership with the RNLI, which is “synonymous with the great outdoors”, said Burts.

Burts Snacks MD Dave McNulty said he hoped the parternship with the RNLI would help people “enjoy the summer safely”.

“We are very excited about the rollout… and hope our support will enable the organisation to continue its fantastic job of saving lives at sea,” he added.

“As a charity, the financial support is also incredibly important to us and will help us to save many more lives,” he added.