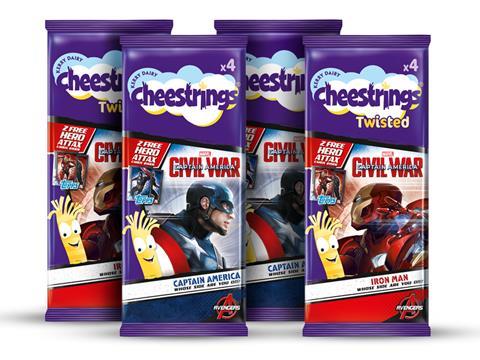 Kerry Foods has unveiled its latest tie-up with Disney, which will see Cheestrings feature characters from Captain America: Civil War.

Rolling out from 11 April, the packs feature Team Cap or Team Iron Man, who face off against each other in the movie, opening in cinemas on 29 April. Every pack includes two Topps Hero Attax collectable cards.

Following the success of Cheestrings’ Star Wars partnership with Disney last year, the new promotion - across packs of four, eight and 12 in Original and Twisted - will get a £1m push including TV for four weeks from 26 April. Marvel’s Ultimate Spider-Man TV series will appear on Cheestrings Spaghetti, while Cheestrings Strong will star both Iron Man and Captain America. “As the nation’s favourite kids’ cheese snacking brand, we are once again driving engagement within the category with a brand overhaul that we know will have real traction with parents who buy Cheestrings frequently, as well as attracting new fans,” said Tom Willcock, kids dairy marketing manager at Kerry Foods.

“The Cheestrings Star Wars activity at the end of last year was extremely successful for the brand, and we are determined to provide mums with something new and exciting in the cheese snacking category for 2016.”