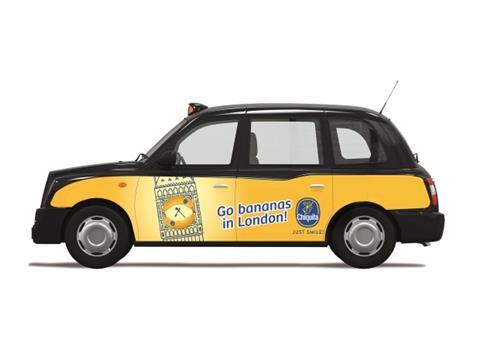 Banana brand Chiquita has launched its first ever UK consumer campaign by advertising on 300 London taxis.

Chiquita branding is adorning the fleet of black cabs throughout October to raise consumer awareness of the supplier’s Class Extra bananas. Sales kits including merchandising material will also be distributed to retailers at a series of breakfast events run by Chiquita and at key fruit and veg wholesale locations.

“We want to create a preference among consumers for Chiquita bananas, to differentiate Chiquita from other brands and provide a sales opportunity for retail and wholesale customers,” said Chiquita director John Cockle.

The designs on the taxis feature London landmarks Big Ben, Tower Bridge, Nelson’s Column and the Queen’s crown, accompanied by Chiquita banana imagery and the strap lines ‘Go bananas in London’ and ‘Just Smile’. Branding extends to the interior of the taxis, with fold-up rear-facing seats carrying the ‘Just Smile’ message – which also features on taxi receipts.

“London is an important market for Chiquita, and that’s why we chose the city for this first consumer promotion,” added Cockle. “Our research has shown that around 5.2 million people will see the Chiquita-branded taxis during the month, and through this campaign we are confident our brand awareness will be enhanced and sales boosted.”