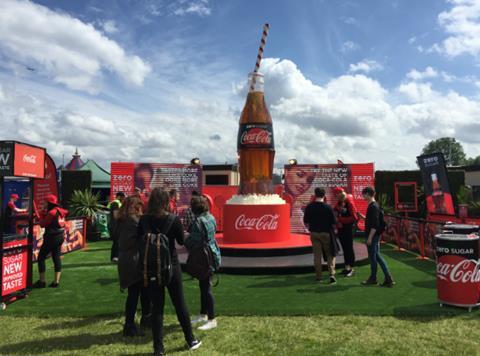 Coca-Cola Great Britain has launched a £10m push for Coca-Cola Zero Sugar, which the soft drinks giant says is its biggest new product campaign in a decade.

The new drive, unveiled today (5 July), focuses on the ‘fun’ of drinking a Coca-Cola - the ‘pleasure’ of opening a fresh can or bottle and feeling the bubbles. On air from 7 July, a TV advert ends with the ‘surprise’ that there is no sugar in the latest variant.

Out-of-home advertising across the UK will use the strapline ‘Tastes more like Coke, looks more like Coke’ and feature the new packaging design incorporating the Coca-Cola red disc as its main feature, in line with the company’s One Brand marketing strategy.

To encourage trial, CCGB is set to give away more than four million drinks over the summer, in the supplier’s ‘biggest ever’ experiential campaign that includes a five metres-tall replica of the Coca-Cola Zero Sugar contour bottle, which will tour the UK

In London, consumers will be offered samples at events including the Barclaycard Presents British Summer Time in Hyde Park, and at a pop-up Coca-Cola Zero Sugar photo booth at Camden Beach Bar. People will be encouraged to share experiences via social media using the hashtag #TasteTheFeeling.

This weekend, the Coca-Cola Zero Sugar Taste Lounge in Central London promises a ‘sensory experience’ of sound and visuals designed as the ‘perfect setting’ to enjoy the NPD.

The new drink is the result of years of development to make a sugar-free version of red Coke, claimed Leendert Den Hollander, general manager at Coca-Cola European Partners.

“That’s important because we know a growing number of people want to reduce their sugar intake but have been reluctant to try a no-sugar option. As well as ensuring it tastes great, we’re putting our biggest marketing investment in a decade behind this launch,” he said.