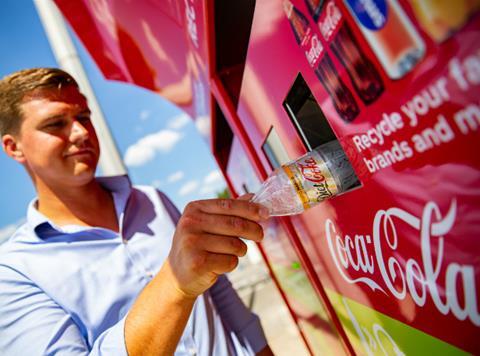 Coca-Cola has teamed up with Merlin Entertainments to offer people 50% off entry to some of the UK’s most popular family attractions in exchange for used plastic drink bottles.

The machines instantly reward recyclers with a voucher to receive half-price entry at 30 participating Merlin attractions.

The initiative was the first in the UK to offer people a reward worth more than the price of the plastic bottle they recycle, claimed Coca-Cola, with the 50% off voucher equating to a saving of around £27 when buying a Merlin day pass.

It comes after a Coca-Cola survey discovered that 64% of Brits would recycle on-the-go more if they were rewarded instantly for their actions.

“We want to reward people for doing the right thing by recycling their bottles and hope to encourage some people who wouldn’t otherwise have done so,” said Leendert den Hollander, vice president & general manager at Coca-Cola European Partners.

The reverse vending tie-up with Merlin hoped to “remind people how valuable their empty plastic bottle is” he added. “All of our bottles can be recycled and we want to get as many of them back as possible so they can be turned into new bottles and not end up as litter.”

CCEP revealed its dedicated Sustainable Packaging Strategy for Great Britain this time last year, driven by a “bold new ambition” to collect all Coca-Cola packaging, making sure none ends up as litter and more is recycled.

The company has since introduced clearer on-pack recycling messaging on its bottles, and reached more than 30 million viewers with a TV ad centred on recycling. Earlier this month, it published its vision for a “well-designed” deposit return scheme comprising 11 principles.