Diet Coke gets a serious revamp: a sign of what’s to come in the UK? 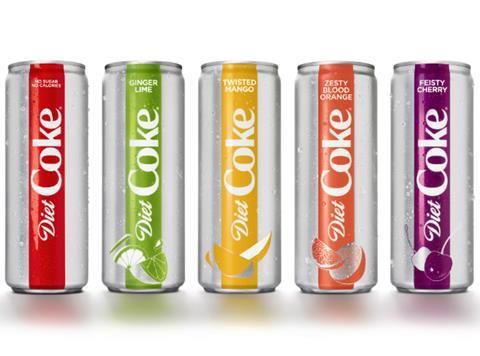 In the US last week, Coca-Cola unveiled, with some pomp, a new look for Diet Coke. While the “bold” and “sleek” redesign, with its simplified colour palate, caught the eye, it was the addition of a slimline 12oz can and four variants that caused the jaw to drop. Here was the biggest change for Diet Coke in its 35-year history – and it could be toasted with original, Ginger Lime, Feisty Cherry, Zesty Blood Orange or Twisted Mango zero-calorie cola.

The two-year process that led to the “full restage” was “fuelled by consumer research pointing to younger Americans’ affinity for big, yet refreshing and great-tasting, flavours” said Coca-Cola, grabbing for the millennial dollar as sales of light and diet sodas dive in the States.

There are a number of reasons for Diet Coke’s decline in its homeland – not least the intense debate over the acceptability of artificial sweeteners. Then there’s the market pressure from soft drinks phenomenon La Croix and its like – the sparkling flavoured water brands that have so far avoided scrutiny over sweeteners and sugar.

There are similar dynamics emerging for Diet Coke in the UK, where value sales are down 0.6% to £420.2m [Nielsen 52 w/e 9 September 2017], with a new raft of flavoured water challengers, including Ugly, Dash Water and La Vie, jostling for shelf space.

Coca-Cola European Partners insisted this week (again) that, in spite of reports, it had “nothing to confirm in the GB market” for the new-look Diet Coke. Which isn’t an emphatic denial. So would Coke’s latest big move for its no-calories soda be worth a punt in the UK?

Hamish Renton, managing director of HRA Food & Drink, says the redesign shows Coke is “taking the battle to the challenger brands and the adventurous shoppers” and would have been “researched to death” by the company to ensure success. But the move is “radical, and Coke doesn’t do well when it does radical”, he adds, citing the example of Coke Life, the reduced sugar flop that was pulled from UK shelves last June. Coke may well feel rather cautious in light of that experience.

Greg Vallance, executive creative director at brand consultancy Honey, is also sceptical about a UK launch. The new Diet Coke design fails to “represent the quality we are used to Coke delivering” he says. The current Diet Coke design used in the UK “has more style and confidence about it, and has the iconic ribbon”. The revamped version means Diet Coke has, Vallance adds, “lost personality and feels cheap”.

At the same time, the overhaul is a great profile-building opportunity, says one senior soft drinks analyst. “The design looks good and would seem like the next phase” of the soda. The slimline can and the lightness of the colours create “a wellbeing impression – which is exactly the space you would expect the brand to move to meet tomorrow’s consumer perceptions” he says, adding the skinny can format is no longer “owned” by energy drinks. “Packaging is having to adapt to a new agenda of which size plays a part.”

Slim cans are a common sight in the UK’s soft drinks segments; less so Ginger Lime and Twisted Mango variants. Will they appeal to Brits? The four new flavours are probably the most problematic area of the Diet Coke revamp, believes Renton. With shelf space at a premium in the carbonated soft drinks sector, even Coke would struggle to get all five variants in store, he says.

However, the drinks analyst argues the ultimate success of the new flavours is not that important. Whether they endure (like Coke’s cherry variant) or fade away (like the lime and vanilla options) is less important than them raising awareness. “It used to be a brand would have a single trajectory on which it succeeded or failed,” he adds. “Nowadays, you have to create all kinds of points of interest. Some stick, and some work just for a time.” (The Australian and Japanese soft drinks markets are adept at such activity.)

So, for now, the jury is out on whether the revamped Diet Coke would make a good fit for UK consumers. If it does indeed come to these shores, the launch will in any case almost certainly happen after April’s introduction of the soft drinks sugar levy. But for now, if sparking a fresh conversation about Diet Coke was Coke’s aim, then job most certainly done.