Dove has gone cuckoo in its latest baby ads 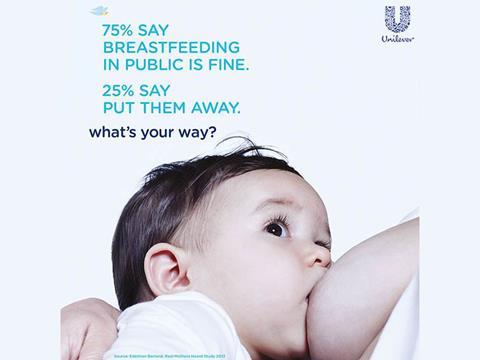 I thought Dove knew ‘real’ women. But its latest ads suggest no one at Britain’s biggest soap brand has ever met a new mother. For Dove has done the advertising equivalent of whacking a hornets’ nest with a big stick; ads for its new line of baby products suggest it supports – or is at least ambivalent to – those who confront mothers who breastfeed their babies in public.

So Dove has gone cuckoo.

I bet they thought they were being clever. After all, Unilever is a master of using divisive ads to sell more stuff. ‘Slag of all snacks’ Pot Noodle grew under its ownership, despite (or because of) ads that inspired hundreds of complaints, including one that likened desire for the snack to a male erection. Marmite, Lynx and Dove have grown on ads that risked alienating certain groups.

These campaigns were at times funny and thought provoking. Dove’s real women ads were rightly lauded for challenging false ideals of womanhood promoted by the fashion industry. The Baby Dove ads, meanwhile, are cack handed. They smack of people who are so used to be patted on the back for being ‘edgy’ and ‘brave’ that they’ve forgotten who they’re trying to sell too.

That is, new parents. “There’s no right or wrong way to be a parent, just your way,” is the ads’ slogan. That’s wrong, legally and medically. UK law states that it’s illegal to ask a woman to leave a public place to breastfeed. The WHO advises that babies should be exclusively breastfed for the first six months of life. It also says the UK is the world’s worst in terms of the numbers who breastfeed.

One in four might feel it’s okay to say ‘put them away’ to those who dare breastfeed in public (we’ll just have to take Unilever’s word for that) but I bet that number is much lower among parents. In April Unilever told us it’s spending £8m on pushing Baby Dove, its “biggest personal care innovation” of 2017. Unless alienating their target consumer was the aim, that money has not been well spent.

As one tweet put it: 90% of parents have vowed not to buy Baby Dove. The other 10% haven’t seen the ads yet.