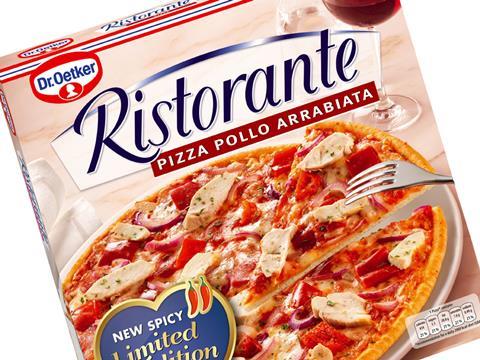 Dr Oetker is to embark on its biggest-ever marketing campaign for its Ristorante pizza range.

The £4m activity will include 20-second and 10-second TV ads from 3 September which showcase new Limited Edition Pollo Arrabiata (rsp: £2.99) – due to launch in Tesco on 16 September – and Margherita, which rolled out in June.

An on-pack promotion runs for eight weeks, starting now, on Mozzarella, Funghi, Pepperoni-Salame, Speciale, Hawaii and Pollo. Each promotional box will contain a code for two vouchers for £1 and £1.50 off a Ristorante purchase. On entering the code, customers will also have the chance to win a supermarket gift card for £5 or £10.