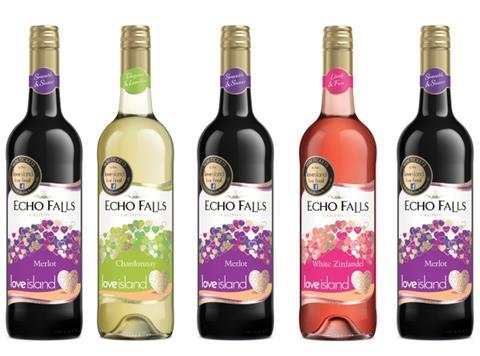 The tie-up will see co-branded bottles roll out across Echo Falls’ SKUs, with the Love Island logo appearing on PoS, in-store, digital and social advertising. A new TV spot will also air around the show and on video-on-demand services where the show is available.

The brand will also direct shoppers who buy the bottles to its Facebook page, where they can take part in a competition to win tickets to the show’s live final.

The show was “a perfect fit for Echo Falls as both brands attract people who have the same attitude and approach to life”, said Echo Falls brand manager Laurence Hinton. “We are partnering with what is probably the UK’s most talked-about TV property with a huge appeal among our target audience of 18 to 24-year-olds.”

It follows the launch of new three-litre double-variant bag-in-box packs for Echo Falls last month, which owner Accolade Wines launched with an eye to tapping festival-goers, picnics and barbecues across the summer.