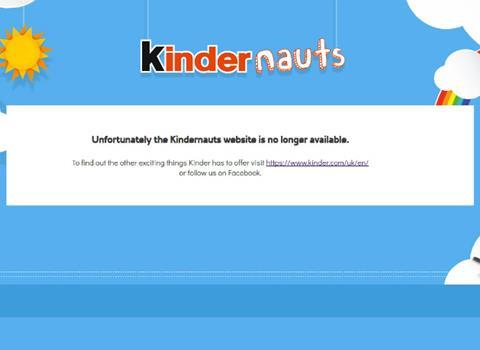 Italian confectionery giant Ferrero has got into trouble in the UK for advertising unhealthy products to children.

The ASA admonished the company following a complaint from the Children’s Food Campaign about three Kinder websites (kinder.co.uk, kindernauts.co.uk and magic.kinder), the Magic Kinder app and the Magic Kinder YouTube channel.

The CFC, part of Sustain, claimed the digital content was targeted at children – pre-schoolers and primary schoolers in some cases – while promoting high fat, salt or sugar (HFSS) products.

Ferrero UK responded by stating it was policy to direct all Kinder-related advertising and marketing communications at adults. The brand’s main website, for instance, featured an age gate that required visitors to be over 12 years old or have the permission of a parent.

The company also insisted its Magic Kinder content was not marketing communications. It comprised “educational/entertainment services provided to parents with the Magic Kinder banner as an indication of the responsible and trustworthy nature of the content”.

Nevertheless, the ASA decided Ferrero had violated rules against advertising HFSS products to children in all instances except that of kinder.co.uk. The offending content must not appear again in the form complained about, said the watchdog. It instructed Ferrero to “ensure that HFSS product ads were not directed at children through the selection of media or the context in which they appeared”.

A spokeswoman for Ferrero said the confectioner had been working with the ASA “to understand the concerns raised”. The company was “committed to acting responsibly, which is why we aim all advertising and marketing communications for our products at adults, not children” she added. “We firmly believe in parental choice and the role that parents play in choosing what is suitable for their own children.”

As a consequence of the ruling, Ferrero had suspended its Magic Kinder app in the UK “for the time being”. The Kindernauts website has also been made unavailable.

Children’s Food Campaign coordinator Barbara Crowther said Kinder’s online content had been “deliberately designed to encourage children as young as three years old to collect the toys associated with Kinder chocolate. In the midst of a rising child obesity crisis, it’s about time the ASA called time on these irresponsible marketing tactics, and we’re delighted it upheld our complaint.”