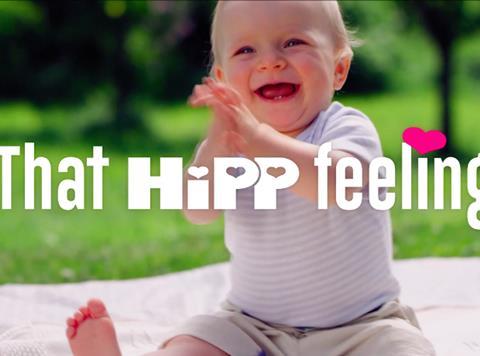 Hipp Organic is to make its TV advertising debut this summer, about 25 years after launching in the UK.

Next month will see the German babyfood brand’s first small screen ad, in a £2m push as the brand moves to recoup last year’s 4% slip in value [IRI 52 w/e 2 December 2017]. The 20-second clip, airing throughout July and August, features a baby being fed from a Hipp jar, ending with a range shot and the strapline ‘60 years organic’.

In the past, Hipp had supported itself through other media and “a lot of promotions” said UK general manager John Allaway. But now was the right time “to re-establish our credentials one again, and there’s no greater way of doing that than a national TV campaign”.

The activity, ‘Feel Hipp’, “aims to show parents that Hipp Organic is there to support them throughout their weaning journey”. It follows sponsorship in the spring of ITV’s Little Big Shots show – which was the brand “dipping our toe in the water” Allaway told The Grocer. “It was always part of our plan to do something on a much bigger scale.”

Backed by digital, social, PR and VoD, the push comes after Hipp rolled out six new tray meals in April.

Last year, the brand unveiled a major packaging overhaul with a focus on jars and the addition of 19 recipes. However, at £47.1m, Hipp’s value sales for 2017 were almost £2m lower than in the previous 12 months [IRI].