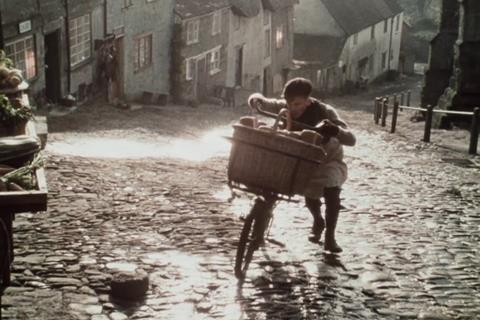 The ad was directed by Ridley Scott and shot in Dorset

Hovis is bringing back its much-loved ‘Boy on the Bike’ TV advert more than 45 years after it made its debut.

The ad, directed by Ridley Scott, will appear on ITV this evening and at peak time throughout June.

Originally aired in 1973, it shows a delivery boy in “post-war Britain” struggling to push a bicycle loaded with bread up a steep cobbled hill.

“T’was like taking bread to top of the world,” says the narrator. “T’was a grand ride back though,” he adds as the boy freewheels downhill.

The commercial – filmed on Gold Hill in Shaftesbury, Dorset – has been digitally restored and remastered by the British Film Institute National Archive and Ridley Scott Associates, while its soundtrack is a re-recording of Dvorak’s New World Symphony by the Ashington Colliery brass band, which provided the original music.

The original ad was “the launchpad for the modern Hovis brand” according to Hovis marketing director Jeremy Gibson. “The values of our brand have never been more relevant, so we decided to remaster and relaunch our ‘Boy on the Bike’ advert. It represents the iconic, family-focused nature of Hovis, that is at the heart of everything we do.”

In spite of being almost 50 years old, it was “as good today as it’s always been and differs from adverts focusing on broader entertainment” Gibson added.

“We are seeing a mass movement across the country celebrating craftsmanship, traditional products and UK produce, and this advert is one of the most iconic examples of a brand celebrating the ties that bind us as communities and as a country.”

Last month, ‘Boy on the Bike’ was named in a Kantar survey of 1,000 people as Britain’s most “iconic” British TV advert of the past 60 years, beating the likes of the Smash aliens and Cadbury’s.

‘Boy on the Bike’ was “a mini masterpiece of big, nostalgic emotion” said Robin Baker, head curator at the BFI National Archive. “The BFI is proud to have restored one of the most potent, popular and iconic films in British advertising history.”