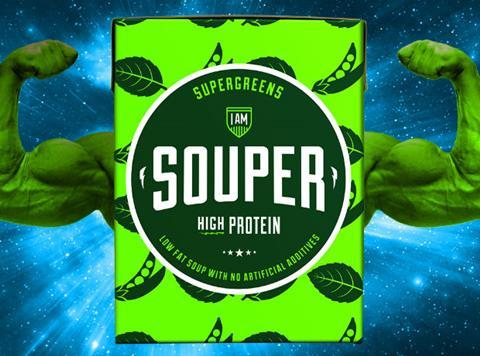 Fresh Marketing - the business behind protein-enriched breakfast brand Fuel 10K - has launched the first above the line campaign for its I Am Souper ambient soup brand.

Running now, the push comprises press and outdoor advertising based on a new “edgier” creative introduced on pack at the beginning of this week.

The push comes as the business revealed it had secured a listing with Sainsbury’s from mid-February, when it will be rolled into 400 of the retailer’s stores.

The four-strong higher-protein brand was launched into Asda in March last year to bring new and lapsed consumers to the struggling ambient soup category, down 2% to £400.2m on volumes down 3.7% [Nielsen 52 w/e 17 October 2015].

Containing beans, pulses and grains - and fortified with pea purée - the soups offer from 2.5g to 4.7g per 100g of protein per pack, which the business claimed to be twice that of rival brands.