Is Jamie Oliver's Tesco role any more than an advertising coup?

Weeks after telling MPs the sugar levy was a tax for love, celebrity chef Jamie Oliver is the new face of Tesco’s fight against obesity.

But as the partnership was revealed by Tesco CEO Dave Lewis, not all suppliers will have shared Oliver’s “super excitement”.

There may be those who ask whether this is all about saving the world or also recouping some of the £12m Oliver forked out to stop his restaurant chain going down the pan. 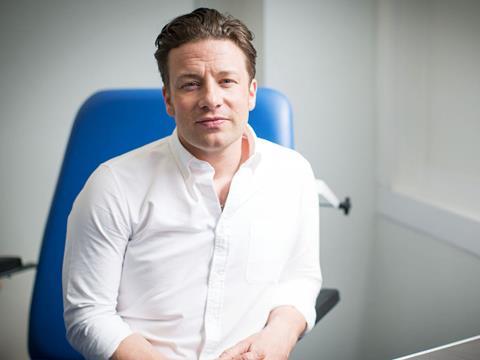 March 2016: Oliver performs bizarre victory dance at Westminster live on the BBC after the government confirms plans for a sugar tax

May 2018: Chef tells the Commons inquiry on Childhood Obesity the sugar levy should be extended, and calls for a junk food promotions ban, saying: “This a tax for good; this is a tax for love.”

As for Tesco, do we believe this is any more than a ‘pukka’ advertising coup dressed up as a health crusade?

Certainly Oliver’s announcement on Twitter was not universally welcomed. ‘We should chip in to send Jamie Oliver to another planet. We need to end his reign of terror on our food,’ was one of many displeased responses.

And Oliver is a strange choice in many ways for Tesco. It’s seven years since he ended an 11-year advertising deal with Sainsbury’s. He has spent much of the intervening period blaming the industry for the obesity crisis, as an adviser to David Cameron, critic of Theresa May and charmer of Nicola Sturgeon.

Yet both Oliver and Tesco are at pains to point out that the new partnership is not about him being the “face of Tesco”.

Lewis was candid about the supermarket needing someone like Oliver to bring “DJ magic” to its quest to be seen as a key player in the obesity fight.

He will head up a new phase of Tesco’s ‘Helpful Little Swaps’ campaign this month, offering heathier versions of HFSS equivalents. Tesco promises a basket of typical swaps would cost 12% less but be on average 20% lower in fat, salt and sugar.

Oliver will also design healthy recipes to be marketed in store, focused on fresh food.

The chef claims to have long admired the way Lewis has geared Tesco around the obesity cause, including its free fruit campaign for kids and two previous Healthy Little Swaps campaigns.

“I feel a responsibility to respond to having been given more access to the various departments of Tesco than any other partner I’ve ever had,” Oliver says. “For me it feels much more grown-up. My job description from Dave is the most simple, most beautiful job description ever. Just focus on listening to customers.

“And I think it will change the rest of the industry. I think everybody else will be looking at how they can react.”

Oliver says the key to success or failure will be how Tesco uses data to prove its campaign improves diets.

“We are going to hold ourselves to account,” he says. “Myself and Tesco are going to review ourselves every year and see if we’ve done what we promised. We’ve either got more people to eat more fruit & veg, nuts and seeds and healthier swaps or we haven’t. We’re either effective or we’re not.

“That will allow us to interrogate whether I’m the problem, they are the problem or maybe we’re not listening hard enough.”

Much depends on whether Tesco’s customers feel they are being listened to or preached at. But the plan will surely be easier to swallow, even for cynics, than some of the alternatives doing the rounds in Westminster.

Lewis tells The Grocer the initiative is preferable to the interventionist approach that sees the DH poised to consult on a sweeping ban on HFSS promotions in store, a crackdown on junk food ads on TV and potentially demonising thousands of products by redefining the nutrient model.

“We haven’t yet seen the detail so we don’t know quite where they will be going with it but if its objectives are responsible and based on nutrition we’ll be supportive,” says Lewis.

“But as soon as you start preaching at customers about what they should eat, that’s exactly what they don’t want.

Watch: Jamie Oliver explains what “got his attention” about the tie-up with Tesco

“Our position is we think the best thing we can do is to raise the awareness out there and then allow customers to choose.

“We’re going to put these healthy swaps on the power aisle. Is that a promotional strategy for us? Yes it is, but it’s more effective than preaching at them.

“I think the government is too obsessed with things like bogofs. It’s much broader than that. One of the biggest issues for customers is that they don’t understand the guidance on nutrition as it is.

“Would coming up with a new one be any better? I think we should be concentrating on getting on with it and doing something about it. Do we need government intervention? I’m not a big fan of it.”

But what about Oliver, the man who slammed the government for ditching many of Cameron’s plans, including an onslaught on promotions, from the original obesity plan in 2016? He tells The Grocer his partnership with the supermarket will not stop him campaigning for bans in the aisles, despite Lewis’s aversion to choice editing.

“The advisers the government have got now are much better,” he says. “I was very much involved in chapter one of the obesity strategy with Mr Cameron. I was one of the only civilians.

“I think it will be very interesting to see where the new consultations end up. I think suppliers are warming to me and for them this is amazing.

“Surely a campaign about getting consumers closer to food, closer to farms and more passionate about cooking can only be a good thing?”

Suppliers infuriated by what they see as the hypocrisy of a comfort food-loving celebrity chef jumping on the anti-obesity bandwagon - those with memories of his bizarre victory dance at Westminster, having arrived on his moped to celebrate the birth of the sugar tax, seared into their brains - may find this hard to stomach. They may also feel queasy at the sight of Jamie’s Veggie Noodle Stir Fry, Fish Finger Sarnie, Mighty Mushroom & Kale Frittata and Veggie Quesadilla Bake, the first in a whole production line of recipes he has in store for Tesco customers.

Yet if some of the enthusiasm and charisma Oliver retains in spades can result in a quantifiable improvement to shoppers’ diets, that must be good, even if Tesco’s and Jamie’s coffers benefit at the same time.