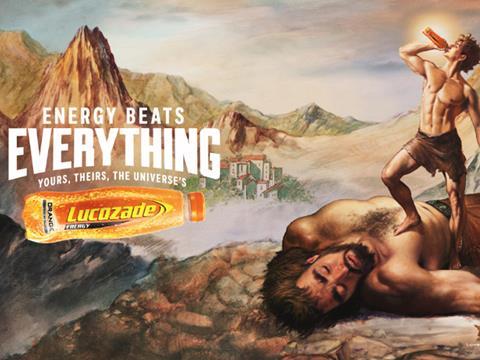 Lucozade Ribena Suntory is readying a £10m push to revitalise sales of its Lucozade Energy brand, after the drink saw almost £63m wiped from its value last year in grocery.

The Energy Beats Everything campaign will kick off on 23 April across TV, out of home ads, digital, social, in-store and sampling.

It would offer “a humorous spin on the well-known David and Goliath tale” said Lucozade Energy head of marketing Steven Hind.

Expected to reach 94% of UK adults, the TV spot focused on “Lucozade champion David the underdog as he overcomes the odds to beat the giant Goliath, showing that when you’re determined, your energy can beat everything”.

With OOH ads created by Peruvian artist Boris Vallejo, the new push follows Lucozade’s partnership with the latest Tomb Raider film, in cinemas earlier this year. LRS wanted to “build on the buzz” for its flagship soft drink, it said.