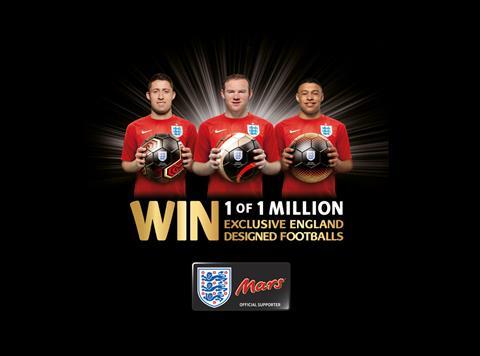 Mars is offering consumers the chance to win one of a million footballs emblazoned with England football team designs, as a part of what the supplier said was its largest ever giveaway.

Launched last week and running until late summer, the promo will feature on single, duo and multipacks of Mars bars. A unique code will be printed on the inside of the wrapper, which the consumer can then enter online or via text to find out if they have won. The special packs will be supported by POS materials including dumpbins and till units.

Mars’s partnership with the FA goes back to 2010, and according to the company, helped Mars to be the leading chocolate singles brand during both Euro 2012 and the 2014 World Cup. Last year, Mars gave consumers the chance to win one of 500,000 personalised England shirts.

“With a successful six year history working with the England Football team, we’re proud to continue our partnership with The FA,” said Mars Chocolate UK trade communications manager Bep Dhaliwal. “Our giveaway looks to generate even more opportunities for retailers to capture the attention of customers with excitement in-store.”