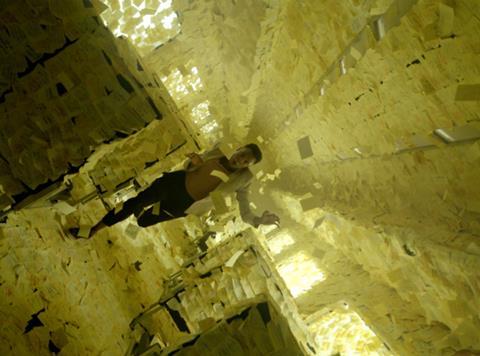 The ad includes a train carriage plastered with sticky notes

Mars Chocolate has laid Audrey Hepburn back to rest, choosing a new, and living, star for Galaxy’s latest TV campaign.

Making its debut on Sunday (3 September) as part of a £3m push, the advert is the chocolate brand’s first new creative in four-and-a-half years. It features actor and poet Jade Anouka, who replaces the CGI version of the late Hepburn which arrived on screen in February 2013.

The latest commercial, called Thought Train, shows Anouka on a rail journey where she experiences a mysterious blue bird, a carriage plastered with sticky notes, and brightly coloured spheres. When she realises the digital world is overwhelming her, the scene snaps back to reality, where she puts down her phone and picks up a Galaxy bar.

Online advertising would play a key role in supporting the ad, the chocolate brand’s first new creative in four and a half years, from launch to the end of 2017, said Mars.

“Audrey Hepburn had “encapsulated the luxury of Galaxy”, said Michele Oliver, VP of marketing at Mars Chocolate UK. Thought Train was “the next stage of this journey”.

“A strong female icon has always been at the heart of the Galaxy story,” Oliver added. “Our new heroine, Jade Anouka, is no different. She is a representation of the modern day, empowered woman and we hope that through this advert, our audience will be able to identify with the symbolic world she finds herself in.”