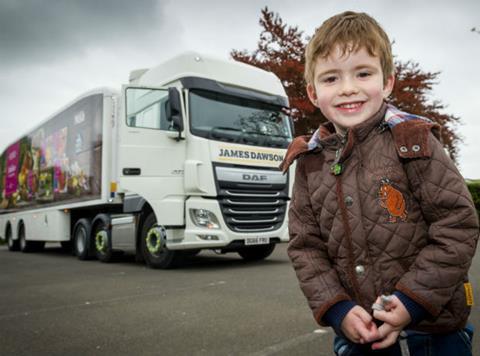 A three-year-old boy has had a Nisa lorry named in his honour after he became obsessed with the truck that delivered to a supermarket near his house.

James Dawson refuses to leave his Peterborough home each morning until he has watched the delivery to the Nisa store in Broad Street, Whittlesey.

“He can’t wait to see it turn up and check that it safely makes the daily delivery,” said James’ mum, Felicity.

“He always gives the driver a big wave and lots of smiles too. As we live directly opposite the store, the driver usually manoeuvres his truck into position by coming nose to nose with our living room window.”

Nisa gifted a toy version of the truck as a Christmas present for the besotted youngster last year after his mum told the company how he has been obsessed with the lorry ever since he was a baby.

“James used to peer out of his cot and watch what was going on and as he’s got older he can now just climb up on a chair and check that the delivery has arrived,” said Felicity.

“He really loves to see the truck arrive before he heads off for nursery.”

And the youngster got a surprise earlier this week when the specially named truck was unveiled at his Park Lane Primary and Nursery School.

The store’s owners, Jamie and Anish Keshwara, also made a £500 donation to James’ nursery through its Making a Difference Locally fund.

“We’ve kept it as a secret and he’s going to be absolutely thrilled to see his name on the truck cabin,” said Felicity.

It is the first time the symbol group has named one of its vehicles in somebody’s honour.

Nisa said it had now decided to launch a campaign to name its fleet after members of the community for its 40th anniversary after being inspired by James.

“As James is such a superfan of the Nisa delivery lorry we decided it would be a nice touch to name it after him and a great way to kick off our Nisa name a lorry initiative to celebrate our 40th anniversary this year,” said Nisa head of PR and communications Alex Rimmer.

“James has the potential to make a very dedicated Nisa driver himself one day. We hope that in naming the vehicle after him, we continue to make him such a happy young chap.”

The initiative, which aims to recognise individuals from the communities that have supported Nisa’s independent retailer members over the past four decades, launched on Friday (12 May).