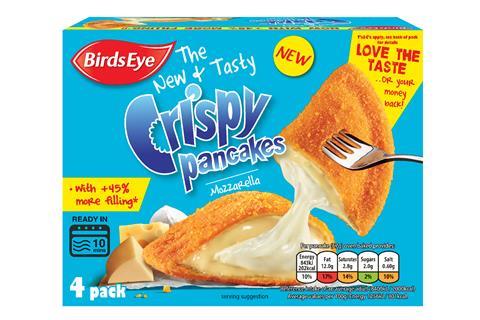 The childhood favourites have long been a Findus brand

The future of Findus in the UK is once again in doubt after parent company Nomad Foods decided to replace the brand’s famous Crispy Pancakes with a Birds Eye-branded equivalent.

The frozen food giant said the Findus range would be replaced with a “modern” Birds Eye equivalent when current stocks run out.

Bringing the crispy pancake range under the Birds Eye umbrella would “highlight the quality of the product inside”, said Birds Eye. The new range is also 20% bigger than the 220g Findus line and contains up to 45% more filling.

Birds Eye said it was also considering other crispy pancake variants. But it is not yet known whether it will continue producing longstanding Findus flavour Beef & Onion.

This is not the first time Findus Crispy Pancakes has vanished from supermarket freezers. A social media furore broke out three years ago after The Grocer reported the range would disappear from freezers after previous owner Young’s Seafood lost its rights to use the brand in January 2016.

However, it was granted a reprieve in April 2016 when Nomad revived it under the management of Birds Eye after its takeover of Findus in a £500m deal in November 2015.

The move leaves the once-prolific Findus brand with just two listings in the mults for its Pizza Pockets in Asda, and comes six years after the brand suffered severe damage to its reputation over links to the 2013 horsemeat scandal.

Frozen lasagne sold under the Findus brand was found to contain up to 100% horsemeat instead of beef. Findus’ ready meals were subsequently pulled from freezers, with the Crispy Pancakes one of the few Findus SKUs to survive the tumultuous period that followed.

“As frozen food continues to grow in popularity, partially led by younger shoppers looking for convenient options containing high-quality, real ingredients, this is the perfect time for us to revive the iconic Crispy Pancake and bring new shoppers to the category,” said Birds Eye marketing manager Alessandro Solazzi.

“The new Birds Eye range still has the crunch of the breadcrumb coating but, thanks to new recipes and extra filling, the products are oozing with delicious flavours too.”