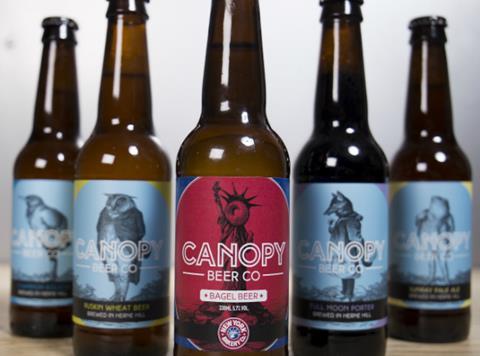 New York Bakery Co is set to mark this year’s National Bagel Day with the launch of its own bottled beer.

Created in partnership with London brewery and tap room Canopy Beer Co, the limited-edition tipple’s brewing process incorporated New York Bakery Co’s Original bagels, lightly toasted and chopped into pieces. The result was “a malty beer, with a hint of cinnamon for added depth, above and beyond a standard ale” said the bakery brand.

The 5.7% abv Bagel Beer (£3/330ml) will go on sale on National Bagel Day (9 February) from Eebria.com, supported by New York Bakery Co’s PR and social media push featuring a new series of bagel recipes and facts. The activity followed a 7.8% volume sales rise for ambient bagels since 2015, the brand said.

Last year, the brand launched an online petition for the introduction of a bagel emoji.