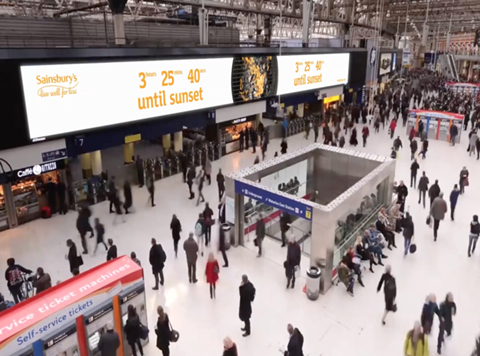 Sainsbury’s is looking to capitalise on the BBQ weather with a new campaign that counts down the hours to sunset.

Large outdoor screens will display the number of hours of daylight left next to a Sainsbury’s logo and image of BBQ food at 19 major UK stations including London Waterloo and Edinburgh Waverley.

The campaign, which will run for two weeks from today, aims to encourage commuters to “embrace extra hours of daylight with a week-night BBQ”.

According to a nationwide YouGov survey of over 2000 adults, 83% of people believe longer evenings are the main trigger for feeling summer is ‘officially here’. As a result, 40% make more effort to leave work on time and 79% say they like to make more of their summer evenings.

“The nation’s love of longer evenings offered us an amazing opportunity to combine data and our Living Well brand message with something unique and specifically tailored to customer mindset,” said Ellie Dixon, campaign manager at Sainsbury’s. “This is the first time we have created something this bespoke, based on what we know about consumers and what the summer season means to them.”