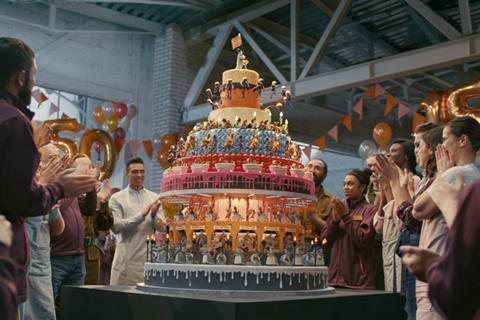 Sainsbury’s has launched a charity and employee-focused TV advertising campaign to mark its 150th anniversary.

The ad, which premiered during Saturday’s (11 May) episode of Britain’s Got Talent, follows the creation of a cake embodying the supermarket’s values and history. Each tier represents contributions from its staff, such as from the opening of its first store on Drury Lane, London, to more recent initiatives like its 20-year partnership with Comic Relief.

The cake was made using a combination of model making, 3D printing and traditional sugar craft, and the illusion of an animated moving image was created through the zoetrope technique. This was one of the earliest forms of animation from the early 1800s and was popular at the time of Sainsbury’s 1869 founding.

A version of the cake will also be on sale in Sainsbury’s cafés for nine weeks from 20 May.

Other standout elements in the 60-second advert include the retailer’s pledge to retain all its employees’ jobs during World War II until they returned, followed by its employment of hundreds of women to continue serving customers. There is also its partnership with the Woodland Trust which has helped plant three million trees.

Sainsbury’s has also introduced an employee volunteering initiative, 150 Days of Community, as part of its anniversary celebrations to encourage employees to spend a day volunteering in the community.

“Community has been at the heart of our business since 1869 and we are delighted to bring to life the achievements and dedication of our colleagues in our 150th campaign. Sainsbury’s has always had a focus on contributing to the communities we serve and we’re proud that this is a legacy that still stands today,” said Sainsbury’s head of broadcast marketing Laura Boothby.

The advert and 150 Days of Community initiative come in addition to Sainsbury’s pop-up immersive exhibition about its 150-year history. It is taking place on 25 and 26 May in Covent Garden, London.