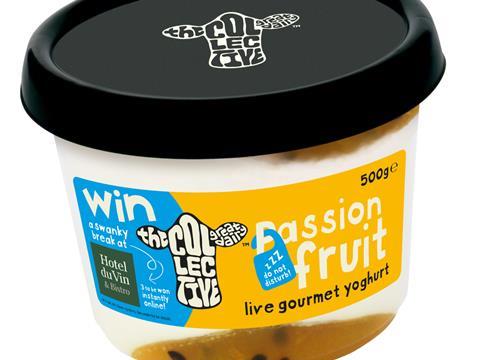 Premium yoghurt brand The Collective has teamed up with Hotel du Vin to boost retail sales and increase its presence in the hospitality sector.

The partnership involves an on-pack promotion offering shoppers the chance to win one of 100 prizes at Hotel du Vin venues, and a deal for Collective yoghurts to be served as part of the hotel group’s breakfast offer.

The on-pack promotion is running for three months from May on all of the brand’s 500g retail yoghurt tubs. Hotel du Vin is now serving 150g tubs of the brand’s Passionfruit yoghurt.

The Collective co-founder Mike Hodgson said he was “delighted” to be working with Hotel du Vin, which was “like-minded” in its commitment to providing a gourmet experience.

The Collective has also this month launched a new limited-edition yoghurt developed by the Modern Pantry chef Anna Hansen.

Rhubarb, Vanilla & Lemongrass is available in UK retailers nationwide (rsp: £2.39 for a 500g pot), with 5p from the sale of each pot donated directly to Against Hunger.

Hansen said the new flavour encapsulated the “most exciting culinary trends of summer 2015”.