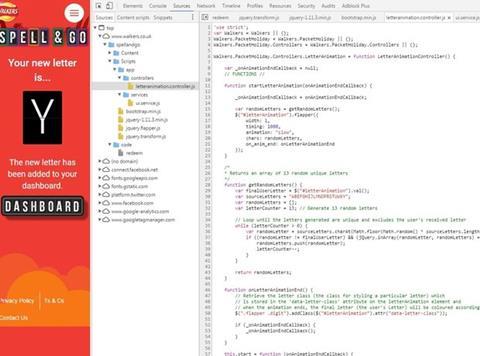 Consumers have posted source code, which they say shows winning letters are being generated from an incomplete alphabet

The Advertising Standards Authority has launched a formal investigation into a holiday promotion run by Walkers, following consumer complaints it is not being run fairly.

The ASA said it had so far received five complaints about the Spell & Go competition, which offers shoppers the chance to win a holiday for four by entering an on-pack code into the Walkers website, which then produces a randomly generated letter.

To be in with a chance to win, participants need to collect all letters needed to spell out the name of one of 26 destinations listed on the site.

But the contest had prompted complaints about the way it was being run, said an ASA spokesman.

“Complainants believe that letters that are needed to spell out the holiday destinations and therefore qualify for the prizes are being withheld,” he said. “They’ve also challenged whether the promoter is dealing fairly and honourably with participants.”

A formal investigation was now under way, and the ASA expected to report on its findings in due course, he added.

Consumers have also voiced their frustration with the competition via Twitter, claiming the letters C, D and K are never generated by the site.

One user posted a screenshot showing source code from the Walkers site, which he suggested showed some letters were deliberately excluded from the random letter generator.

But a spokewoman for Walkers owner PepsiCo said the company had made sure the “right quantity and combination of letters”, including C, D and K, were in circulation and distributed at random to ensure “everyone across the country who participates has an equal chance of winning”.

“We’re aware some customers are disappointed they haven’t been successful in winning a holiday yet, but people are winning, the competition is still open, and there are more holidays to be won,” she added.

The Spell & Go push launched on 18 April across the brand’s core single and multipacks portfolio, and is being promoted via TV, online and social media.