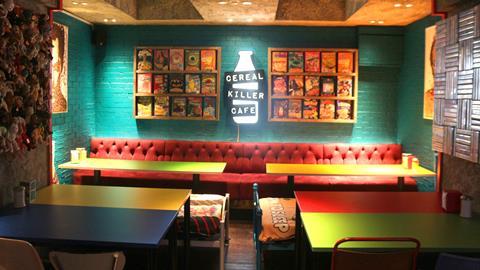 Why hipsters could be the unlikely saviours of cereals

Few things scream Shoreditch quite as much as the Cereal Killer Café. Its £5.50 bowls of cereal have become such a symbol of the capital’s hipsterdom they have even inspired a musical (yes, really). Numbers will include cereal-themed hits such as ‘I Should Be So Lucky Charms’ (no, not really).

Now Kellogg’s is hoping to prove highly priced cereals can tempt a demographic beyond the East London crowd. Today, it is opening a pop-up café in partnership with Cereal Killer in Manchester.

For four days, it will serve up creations featuring trusty Kellogg’s cereals – including ‘cereal remixes with a Manchester flavour’ such as ‘Buzzin’ Bee Krunch’ and ‘This Charming Bran’.

It could be a gamble venturing outside the capital, where residents are so used to paying a premium they have given up questioning £5.50 bowls of cereal.

Is wellness worth it? Cereals category report 2019

By contrast, Manchester icons include the Gallagher brothers and Shaun Ryder from the Happy Mondays. It’s hard to imagine any of the above forking out more than a fiver for a ‘cereal remix’ without a few choice swear words.

The thing is, the Cereal Killer Café sells far more than overpriced cereal. It also makes a relative commodity into something fun. Décor in its London branches includes nostalgic fare such as Beanie Babies, Power Rangers merchandise and Twister on VHS (basically the childhood dream of the nineties).

The cafés host regular events such as Disney quizzes and retro film showings. Menu items range from a Pop Tart ice cream sandwich (just don’t ask for the sugar content) to a ‘superbowl’ with Coco Pops, chocolate-covered Cornflakes and ice cream. It’s more than just the cereal you eat at your desk – it’s a treat.

Creating this treat mindset just might be vital to the future of cereal. Concerns over sugar and processed food have seen sales of the ready-to-eat stuff steadily decline over the past few years, with value falling 1.7% in the past year to just under £1.3bn [Kantar Worldpanel 52 w/e 9 September 2018].

Opinion: Why 2019 will be the year of radical indulgence

Now Kellogg’s is including traffic light information on its packs that will clearly show how much sugar and calories each bowl contains. While it’s the right thing to do, it could prove yet another deterrent for the health-conscious shopper.

So positioning cereal as a treat could be a savvy strategy. The rise of freakshakes and indulgent outlets such as Doughnut Time show we are still a nation who enjoys a blowout every now and then.

We’re just more averse to eating something relatively unhealthy every day. The rise of more sugary cereals such as Krave, up 9.6% in value, and Crunchy Nut, up 3.8%, is proof of this mentality [Nielsen 52 w/e 8 September 2018]. When we think of our favourite sugary cereals as a treat, there is still a market.