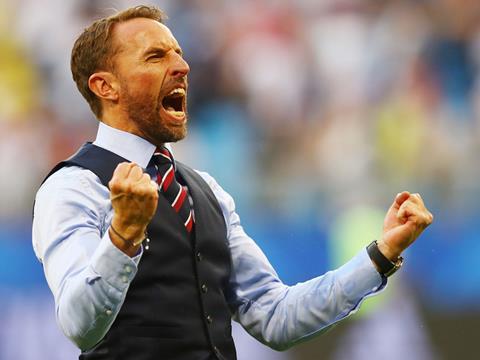 Even beleaguered M&S has almost inadvertently scored as the dapper Southgate became the style icon of the summer, inspiring the #waistcoatwednesday craze and resulting in stocks running out

Every couple of years, when a major football tournament arrives, retailers and suppliers keep everything crossed in the hope that the England team can deliver on the pitch, and in so doing, ignite a feeling of national pride and goodwill which translates into bumper sales.

Yes, the 2012 Olympics were great and grocery certainly enjoyed a boost (once the rain stopped and the Games got underway, at least), but nothing compares to football in terms of engaging the population and getting us together to drink beer and eat copious amounts of not so healthy snacks.

This time around, however, fears over the perceived threats from Russian hooligans and political tensions between London and Moscow meant the usual football-related marketing blitz felt quieter than usual. Of course this was also allied to the successive failures of the team, making some brands cautious of getting their fingers burned again.

But the success of Gareth Southgate and his young charges has put paid to all that negativity. Along with the heatwave, this really has turned into the summer the grocery industry has always dreamed of. And at last the industry is starting to enjoy itself.

Lidl, the official sponsor of the England team, will clearly be hailing its decision to stick with its patronage through the thin of the Euros to the thick of Russia 2018. In fact, its decision to announce that its stores will close early if England get to the final was ahead of the game in every sense, and helped to reinforce its support for the team.

A bit like the FA, with its appointment of Southgate, even beleaguered M&S has almost inadvertently scored as the dapper Southgate became the style icon of the summer, inspiring the #waistcoatwednesday craze at offices up and down the country – resulting in stocks running out. 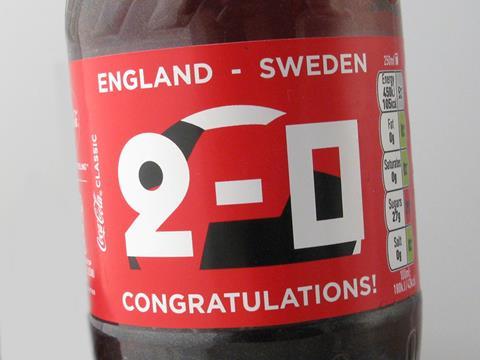 In celebration of England’s victory over Sweden, Coke has circulated bottles featuring the 2-0 scoreline

Fmcg brands have also been having fun. In celebration of Saturday’s victory over Sweden, Coke is already circulating bottles replacing its name with the 2-0 scoreline.

Like the England team itself, we’re showcasing our inventive, creative side as an industry. The ‘McKane It’s Coming Home’ chips is a favourite. Iceland has slapped ‘it’s coming home’ on its delivery vans, which, if not exactly original, certainly makes sense.

Aldi has also entered into the spirit with press ads this morning highlighting its matchday deals under the tagline ‘Deli Aldi’ (while promising that ‘the lions feast tonight’).

Meanwhile, the Morrisons St George’s flag pizza, in which the cross is made out of pepperoni, is also fun, even if it is only going to lead to you having to rearrange the toppings once you’ve got it home.

My advice for the industry is simple: enjoy this moment now and milk it for all it’s worth. Opportunities like these do not come around often – every 28 years, you might say, but it’s rarer still: to have this run at the same time as a heatwave (the hottest in 42 years) makes it even more of a gift.

Let’s just hope the team can see off Croatia tonight and keep this feeling going until Sunday. And that stocks of beer, soft drinks, meat, salad and all the World Cup trimmings don’t all run out at once.