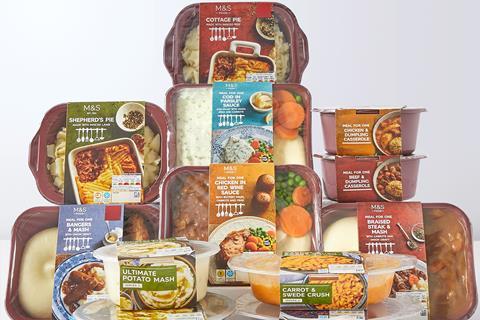 Amongst the new options is an M&S Traditional Meals box, including beef casserole and shepherd’s pie

M&S has added three new options to its range of food boxes for delivery, bringing the total to 10 in response to popular demand.

Demand for the boxes has been so strong that some variants have sold out in recent days, according to M&S. Since the launch of the online service in March, 146,000 boxes have been sold.

The new options are an M&S Traditional Meals box, including beef casserole and shepherd’s pie, an M&S Indian Takeaway Big Night In, with curries for a family of four, and a Seasonal Fruit, Veg & Salad food box with Maris Piper potatoes, avocados, carrots, bananas, apples and grapes. The three boxes cost £40, £35 and £25 respectively.

Existing options include a 100% British Meat box and a Seasonal Vegetable box.

The first two options launched – vegetarian and non-vegetarian variants of a Store Cupboard Essentials box – have also been reformulated in response to customer feedback.

Some sweet and confectionery items had been removed and replaced with “more staple essentials” like oats, sugar and jam, M&S said.

The two boxes have also been lowered in price by £7 each, making the standard one £28 and the vegetarian edition £23.

The service, intended to help vulnerable shoppers during the pandemic, marked an early entry into online grocery for M&S, before its range arrives on Ocado’s website in September.

The retailer also launched online grocery with Deliveroo from franchise stores at BP petrol stations in April, in a trial which has since rolled out to 20 M&S stores.