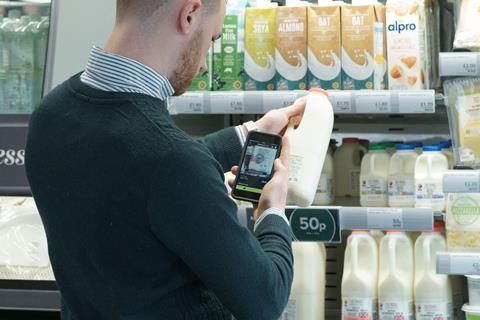 M&S is rolling out a checkout-free, mobile self-scanning and payment option to a further 44 stores, following an 18-month trial.

Customers use the M&S app to scan barcodes as they walk around the stores. Once they’ve scanned everything they want, they pay using the card they’ve saved in the app and leave.

Removing the requirement to stop at a checkout means shoppers can “purchase their lunch in under 40 seconds” M&S said.

During lunch time, those stores are reported to have clocked up a Mobile Pay Go transaction every three seconds.

The checkout-free option “helps to reduce queueing times and frees up colleagues so they can offer great service in other areas of the store” the company said.

“Today’s rollout means more of our customers will be able to benefit from this popular technology and enjoy a seamless shopping experience – which we know is especially important at lunchtime,” said Sacha Berendji, M&S director of retail, operations and property.

“M&S is changing to become a digital-first retailer with industry-leading store operations, and Mobile Pay Go is a really exciting part of that,” he added.

The company said that Mobile Pay Go would be rolled out in further stores “where it’s right to do so”. All its 50 mobile self-scan and payment enabled stores are in London, apart from one, Market Street, Manchester.

The M&S rollout is the most extensive of the major chains. Sainsbury’s, in what it called a “UK supermarket first”, introduced in-app scanning and payments at its Clapham North Station Local store in 2018. The option is now available in eight stores.

Co-op launched ‘Pay in aisle’ to 30 stores in a trial starting in July last year and Tesco has made in-app payments available to 5,000 employees to trial.